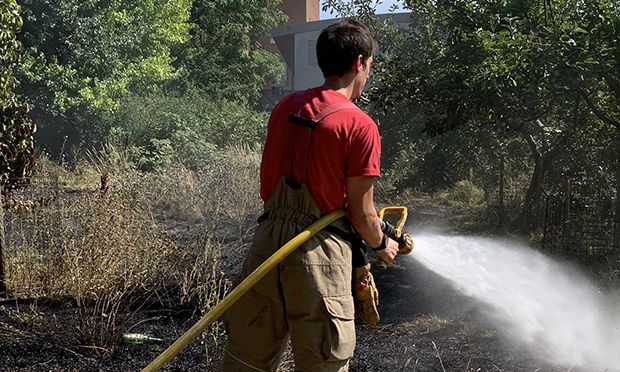 A firefighter hoses down the area. Photograph: Millfields User Group

Gardeners who planted an orchard with Hackney schoolchildren are distressed after several of the trees were damaged by a fire.

The Tree Musketeers planted 51 trees at South Millfields Park in 2009 with the help of pupils from Rushmore and Millfields schools.

The orchard has been carefully tended to ever since, producing apples, pears, peaches, damsons, cherries, and apricots.

It was created for its beauty and for people to learn about food-growing, as well as to offer access to free food.

It is one of a network of orchards the Tree Musketeers have planted in Hackney parks.

The volunteer group tweeted its disappointment at seeing their dedication go up in smoke: “All the care and commitment of growing, planting and looking after these trees over many years can be wiped out in a few minutes by someone’s carelessness.”

Firefighters were called out last Saturday to tackle the blaze, which left grass heavily charred.

Council-run Millfields Park is made up of three open spaces between Lea Bridge and Chatsworth Road and framed by avenues of mature plane and elm trees. 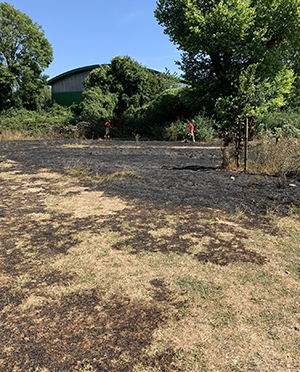 Millfields User Group planted 20 trees in the park in the winter of 2020/21 and more this February.

They finished work on the orchard trees last autumn. This included weeding, mulching, and replacing guards and stakes.

The London Fire Brigade has tackled more than 800 grass fires over six weeks this summer. The service has warned that the extreme heat and lack of rain leaves grass tinder-box dry, making parkland vulnerable to fire.

Christine Kings, from the Millfields User Group, said: “The fire was at the southern-most end of the orchard area behind the electricity sub-station in South Millfields park.

“Most of the damage was to the grassed area but three or four trees have been fire-damaged.

“The fire officer I spoke to said it may have been kids messing about.”

She added:  “I gather there was no evidence of a barbecue. It spread quite quickly because the grass was so dry.

“It looked quite scary, it was smouldering and there was a lot of steam.”

The orchard was the victim of an arson attack in the past.

Kings said volunteers were stunned to find a couple having a barbecue close to the burnt grass “within a few hours of the fire”.

Barbecues are banned in Hackney’s parks because they are a fire hazard, damage the grass, and worsen pollution.

Firefighters took nearly an hour to extinguish the fire.

A London Fire Brigade spokeswoman warned: “Many grass fires are avoidable, with the most common causes being carelessly discarded cigarettes and matches, unattended barbecues and glass bottles that have been left on dry grass.

“We’re also concerned that some grass fires are being started deliberately and are asking parents to talk to their children about the dangers of starting fires.”

Hackney Council’s tree wardens have asked residents to water street trees to help them cope during the extreme weather.

The Tree Musketeers have also been watering trees.