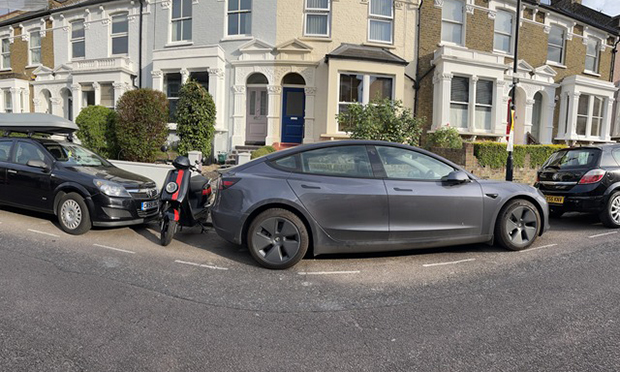 Electric scooters will also have to pay the planned charges. Photograph: Save London Motorcycling

Motorcyclists say new parking charges in Hackney will affect low-paid workers, medics and delivery drivers, and price some commuters off the road.

Save London Motorcycling (SLM) wants Town Hall bosses to reconsider proposed charges which could see them paying £6 an hour.

Under the council’s plans, motorcycles, scooters, and mopeds would be able to park in a bay for up to four hours.

But the campaign group says motorcylists unable to afford the charges could “be plunged into transport poverty at the height of the cost-of-living crisis”.

Westminster and Lewisham are the only other inner London boroughs charging motorbikes – with full passes costing up to £2 per day.

SLM estimates that motorcyclists in Hackney could face charges of up to £60 for 10 hours if they moved between bays – around £1,200 a month.

It has launched a petition calling for a rethink.

Hackney Council said it would not be possible for motorcyclists to face those charges because “we have introduced four-hour maximum stay bays”.

SLM member Rachel said: “The purpose of this is to prevent commuting by motorcycle. You can’t just move to another bay if you are commuting and they are four-hour bays.”

She said many motorcyclists are in low-paid work such as cleaning, night security, and making deliveries.

Campaigners argue that the council has “a lack of understanding of our impact on the roads”, and say they create less pollution and take up far less parking space than cars.

They said: “The unfair charges would even apply to electric motorcycles despite those vehicles being zero-emission.”

GP Sharon Raymond, who is director of the Crisis Rescue Foundation, said its team of bikers, which delivered 5,000 oxygen-measuring devices to patients during the pandemic, could be hit by the charges.

“This is just one example of London bikers stepping up to do good,” she said. “Our service, which is being used daily by the NHS, would be badly impacted by the proposed parking charge changes in Hackney.”

Motorcycling campaigner Cathy Phillpotts from Motorcycle Action Group is set to ask Hackney’s senior councillors to look again at the decision at a cabinet meeting on Monday.

A spokeswoman for the council said: “We are committed to improving local air quality and tackling the climate emergency.”

The council asked for people’s views in 2020 and decided last year “to place motorcycles on the same footing as all other vehicles, with permit prices based solely on the emissions they produce”.

The spokeswoman said the change “will allow businesses, delivery riders and other organisations that provide valuable services to continue to do so, while also discouraging the use of motorbikes for commuting, which contribute to local emissions and take up valuable kerb space from local residents and businesses”.

Parking permits in Hackney are based on the CO2 emissions of a vehicle, with a diesel surcharge levied due to their impact on local air quality. The size of a vehicle is not a factor that is taken into account.

The council has met with motorcycle groups to hear their views and said they will be taken into account before a final decision is made.