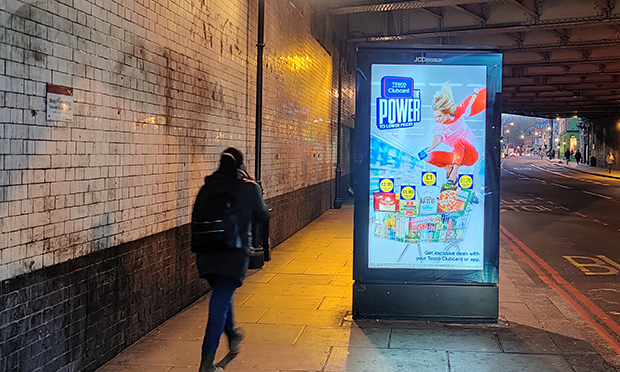 Campaigners are calling for an end to pavement adverts in an effort “to reclaim public space from corporate profit”.

It comes as Hackney Council considers whether to renew contracts for 40 street advertising boards – a move that could earn it £200,000 a year.

Politicians are planning to remove 14 of the “most obstructive” billboards, including eight in Shoreditch – dubbed Europe’s largest night-time economy – which yield 85 per cent of the total income from the outdoor adverts. The council stands to lose up to £95,000 by scrapping them.

The contracts mean the boards can display some public information but critics say councils are not given equal airtime compared to commercial adverts.

The Town Hall wants to move 17 other adverts. Transport for London has the final say on another 37 sites as they are on red routes it controls.

Former planning committee chair Vincent Stops, who stood down from the council this year, tweeted: “If it looks like commercial advertising targeting motorists, then it probably is. Councils should not be allowing their pavements to be obstructed in this way.” 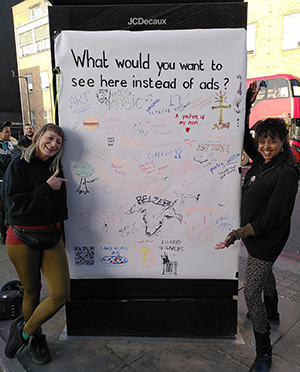 Campaigners use one of the sites to raise awareness. Photograph: Adblock Hackney

Earlier this year, nine of the sites were removed when planning applications were turned down after 150 people objected.

Adblock Hackney co-founder Alastair Binnie-Lubbock, who is now a Green councillor for Hackney Downs, said: “Many of these billboards promote the consumption of products that are damaging to people’s health, finances and the environment.

He said the Highways Act means structures on public highways have to benefit residents “so any boards should be first and foremost council information boards, not commercial advertising with incidental, occasional, council adverts”.

The Town Hall’s head of marketing and commercial services, Jonathan Lyons, said future contracts need “to be fully digitised in order to realise any serious return on investment”, with pre-energy hike estimates suggesting each digital billboard could yield £,5000 a year.

He said the boards are a good way of getting council messages to people who do not have access to digital technology.

Politicians on the council’s cabinet procurement committee are looking at options for 15, 30 or 40 sites, which could earn between £60,000 to £200,000 a year. A Town Hall report recommends allowing 40 sites.

There has been outdoor advertising, known as “Out Of Home”, in Hackney since the 1990s.

The council report said it helps spread messages about services, the Hackney Half and Hackney Carnival, campaigns such as its anti-domestic violence work, and key public health guidance over Covid, as well as boosting council coffers.

A 25-year contract with JCDecaux ended last year but was extended for up to 18 months to allow for “proper political discussion”.