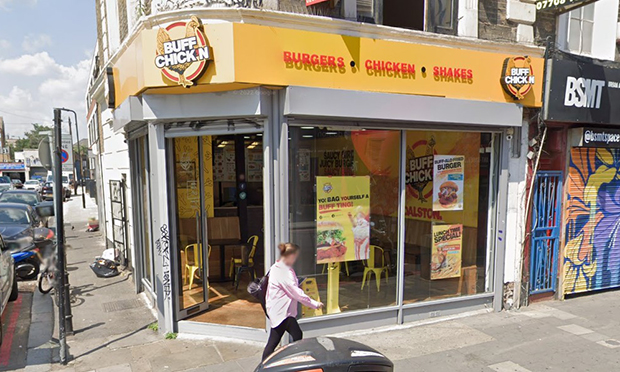 A Dalston chicken restaurant has been asked to reconsider opening until the early hours at weekends amid concerns about noise from revellers.

The team behind Buff Chick’n on Kingsland Road wanted to stay open until 4am on Fridays and Saturdays to serve people leaving nightclubs.

It currently closes at 11pm on weeknights and at midnight on weekends.

Dalston has been designated a special policy area because of the concentration of late-night bars, clubs and eateries.

The rules were introduced in 2014 when respondents to a council consultation complained about littering, anti-social behaviour, and noise.

Usman Ahmed told Hackney’s licensing committee this week that no alcohol is on offer at Buff Chick’n, adding: “We will do everything you guys have asked of us to the best of our ability.”

He said there would be no music and a doorman would be on site, together with CCTV to prevent any nuisance.

He said the area is “lively” but the takeaway would not add to any problems.

He said vehicles idling late at night “has been going on for a long time”.

Residents living at nearby Colour House on Bentley Road said the prospect of extended opening hours “fills us with dread”.

They fear “significant sleep deprivation as the clientele it would attract at these hours are those that have left pubs and clubs and not likely to be the quietest”.

One nearby resident said: “We already suffer quite considerable noise pollution in the area, particularly late at night.”

PC Amanda Grigg said the eatery was open after its permitted hours in February but the venue apologised for the slip. She said her other concern is the venue’s location in the special policy area.

Committee members Cllr Gilbert Smyth and Cllr Susan Fajana-Thomas suggested that Ahmed tries to close at midnight to demonstrate there will be no late-night problems.

He was also advised to consider applying for temporary events licences to try out later hours.

Ahmed suggested 2am as an option to show that the extended hours would work at the business, which recently marked its third birthday.

The council will publish a decision in the coming days.