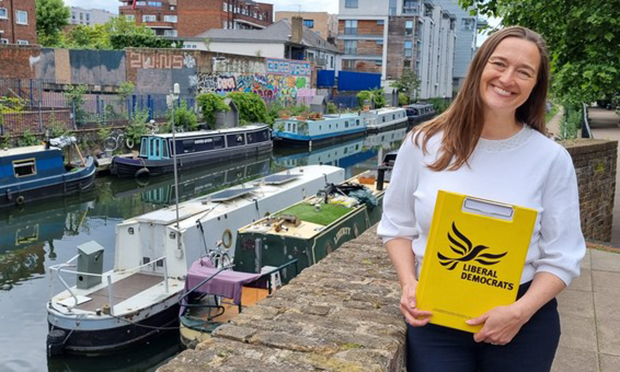 “I feel I can offer a fresh perspective in this election,” said Liberal Democrat candidate Thrusie Maurseth-Cahill.

She is standing in July’s by-election in De Beauvoir, where she once lived, and said there is no dispute about the hot topics on the doorstep.

Cost of living, the climate crisis, public transport and crime are all priorities for voters, she said.

If elected, she wants to put forward the views of residents to prevent “the people most affected” being left behind, and she pledged to make them aware of opportunities to have their voices heard.

As an example, she cited threats to bus routes by cash-strapped Transport for London, which could lead to “diminished services” for wheelchair and pushchair users, who could instead decide to use cars, with a knock-on effect on air quality.

The hotly contested by-election was called after the resignation of Labour councillor Tom Dewey just two weeks after the council elections in May.

Voters in De Beauvoir will go to the polls again on Thursday 7 July, with the results expected the following day.

Currently, there are 49 Labour councillors, five Conservatives and two Greens.

Maurseth-Cahill believes there needs to be more political diversity at the Town Hall. She stood for election in Stoke Newington in May’s elections and gained 407 votes.

For 10 years, she was the volunteer co-ordinator at Hackney Night Shelter, where she learnt “about the different ways of working with people” .

She currently works in fundraising and has previous experience in lobbying the EU to cut the cost of food.

She is in favour of modifying low traffic neighbourhoods (LTNs), which have proved controversial, with some fearing they have simply moved the problem to boundary roads.

It is essential, she said, that people “are not cut off from vital services”, adding: “LTNS can be made to work. I am sure there are solutions.”

She also wants to ensure the council consults business owners who may not be local voters about changes that could impact them: “They are part of the community and we need to be mindful of their role as local employers.”

She said parking controls can hit businesses hard and need to be thought about carefully to avoid customers being dissuaded from visiting the area.

Another key issue is policing, which is increasingly under the spotlight in Hackney following the Child Q scandal, which saw a Black teenager strip-searched in her school.

“I share the community’s concerns. I was shocked to the core,” said Maurseth-Cahill.

There has also been a rise in thefts by people on bikes and she wants to work with police to clamp down on it.

“There was a young woman near me who had her phone stolen,” she recalled. “She was visiting the area and was relying on it for directions. She was shaking after what happened.”

Police were able to capture an image of the alleged thief because the victim was on a video call.

Maurseth-Cahill is also passionate about young people getting the help they need to catch up after the pandemic, and about their access to mental health support.

“Schools went above and beyond – getting laptops to pupils and supporting them – and I want to learn from their success,” she said.

The full list of candidates for the De Beauvoir by-election is:

← ‘Be disruptive in a positive way’: Founders of social enterprises in Hackney form network to share advice and expertise‘I like to think I blazed the trail’: Hackney MP Diane Abbott celebrates 35 years in office →