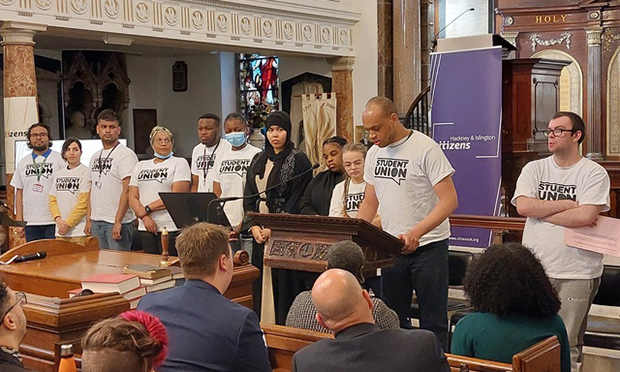 Students and parents gave powerful testimony as they quizzed election hopefuls at a community assembly.

The participating Islington candidates were Kaya Comer-Schwartz for Labour and Benali Hamdache for the Greens.

New City College students explained why they wanted candidates to help them.

They want a fund for parent-led support, paid special educational needs (SEN) advocates, and a cross-border group from education, social services and mental health services to deal with concerns from schools and colleges.

Irene, who has three children on the autism spectrum, said she got support from a parents’ group when she removed her son from school after he was bullied.

“They gave me the confidence I needed to speak up for my son’s needs,” she said.

Hackney student Alice told them: “It’s important to me that me and other SEN learners are understood and treated with respect.”

He said: “Sometimes people assume that I’m not smart because I’m in SEN classes.  I want people to know that  SEN students do work hard  and can achieve big things when we are 100 per cent supported.”

James said: “I had to do home tutoring for many years because I struggled to fit in at school. I couldn’t be with my friends and I wanted to go back to school.”

He has become the abilities officer at the New City College student union.

“I’m a role model and I have experience,” he added. “All SEN students deserve help and support to get where they want to go, like me.”

He backed the idea of cross-border working.

Garbett, who has commissioned SEN services in her day job, said: “I’m really excited to listen to you to improve the lives of children and families with SEN.”

Glanville said: “I’m committed to working to ensure that no-one falls through the gaps.”

Kaya-Comer Schwartz said: “I want to work with people, I don’t want them to feel that there is not a future for them.”

And Benali Hamdache said: “I’ve talked to parents who’ve had a really rough time and had to home school because the school is so inflexible about meeting their needs, punishing them for not being able to turn up on time.

“We need a more flexible approach to how children with special needs are supported.”

The candidates were also asked to back a manifesto that includes helping migrants and refugees get the opportunities they deserve and asking businesses to join a programme offering them paid work at or above London Living Wage.

She is doing a phD into decolonising higher education, and said: “Why do I  as a student of colour feel that I have to do 10,000 extra steps to feel that I belong?”

She called for candidates to pursue anti-racist policies, and students asked for an event to develop anti-racist leadership and help businesses put policies into action.

All the candidates agreed to every item on the Hackney and Islington Citizens manifesto.

Hall, Garbett and Baxter are all standing in the council election too.