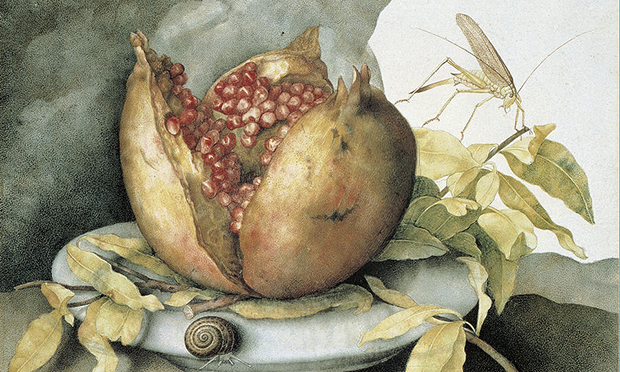 The pomegranate hardly seems a suitable snack for a small child who might choke on the pips, or slosh the juice all over its diaphanous garment, but the fruit often appears in art as a symbol of fruitfulness and fecundity, or representing the millions of souls within the Christian church, with their saviour, the infant Christ, clutching a ripe fruit.

Many a Florentine housewife in the 1480s must have shuddered in despair at Botticelli’s somewhat detached take on child care, with the infant’s unprotected bum dumped on his mother’s blue silk gown, while the indelible stains of pomegranate juice threaten his white smock. 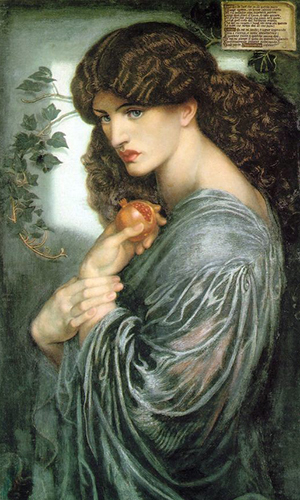 Better by far to abandon living dangerously and put this fruit back where it belongs, in the kitchen, and use the beautiful red globules, technically known as arils, to decorate pale white food, as Maestro Martino de’Rossi did in the 1460s with his enigmatic biancomangiare, a dish of cooked chicken breasts pounded in a mortar with ground almonds, a little chicken broth, and seasoned with sugar and spices.

This unearthly white dish was food for the rich and privileged whose linen had the same expensive difficult-to-obtain pallor as this luxury food. Everyone else had to be content with sludge-coloured mush, the thick soups and porridges of pulses and vegetables eked out with meat broth if you were lucky.

Martino also used the juice of pomegranates to season roast chicken or fish. Easy to do and lovely to look at. Roast or fry fillets of any firm white fish, like sea bass or gilt-head bream, and serve on a bed of samphire rinsed in boiling water, then tossed in butter with a little chopped garlic displayed on a white serving dish, over which you squeeze fresh pomegranate juice, and scatter plenty of the globules.

You can do this with chicken breasts and any green vegetable to get this brightly coloured dish ready in less than 30 minutes flat, ‘tired cook in a hurry’ cooking at its best. You don’t need a tool or special pin to get at the pips, just claw them out with fingers and thumb, taking care to exclude the yellowish fibre that contains them.

Fruit as myth and symbol

The clear bright colours and fresh flavours of this simple recipe are typical of the New Cuisine that Italian Renaissance artists and writers enjoyed alongside the new art and architecture. A radical departure from the ornate High Gothic, in food and art, of the rest of Europe. 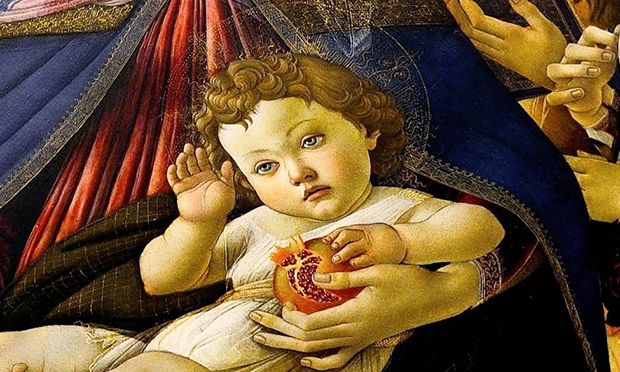 Much of this was inspired by enthusiasm for Classical art, so the pomegranate would remind Botticelli’s contemporaries of the Greek and Roman legends of Persephone or Proserpine, the daughter of Zeus, the king of the gods, and his wife Hera, who was understandably unhappy when Pluto, the god of the  underworld, dragged her down to Hades.

The distraught parents were told she would be released if she did without  food or drink , but when Proserpine was caught snacking on a few pomegranate seeds she was condemned to six months of winter darkness and misery underground, and so were we, sharing her fate for half the year, our first experience of climate change.

Morris handled their relationship with considerable magnanimity, providing them with a refuge in Kelmscott Manor, in Oxfordshire, close by the tributary of the Thames, the Windrush. 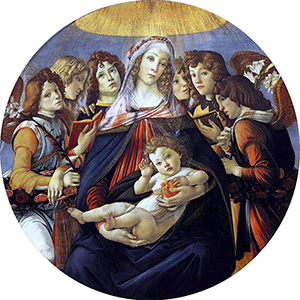 We associate Morris with his workshops in Merton and Hammersmith in south west London, but he was brought up in Walthamstow where his home is now the William Morris Museum, and spent happy days wandering in Epping Forest, or exploring the water meadows of Essex.

Here in Hackney we can carry on cooking with pomegranates thanks to the plentiful supplies of fresh fruit in most of our greengrocers, and the bottles of pomegranate syrup to be found in Turkish food stores, which adds an astringent but sweet fruitiness to stews and casseroles.

We can pig out on trendy Bowls of Goodness, where smashed avos and pomegranates might drive us in desperation to Bowls of Badness, like pot noodles topped with deep-fried Mars bars, which our beloved inner microbes can handle with ease.

From pagan and Christian symbolism to modern Super Fruit the pomegranate has a glowing future, but best perhaps as an ingredient, with the pips and juices well under control, rather than a symbol.