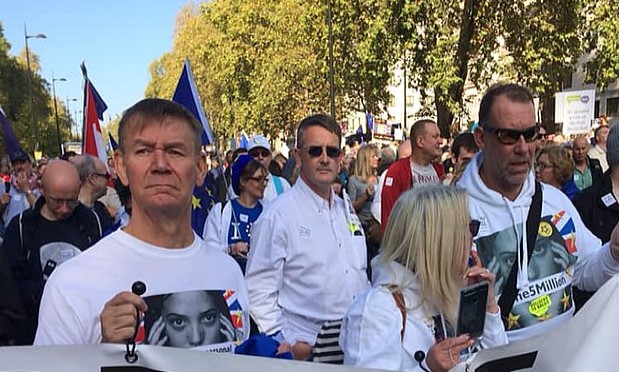 Hackney’s Mayor has “left open” the possibility of the council officially backing a second EU referendum in the New Year.

The news came in the wake of Hackney’s Liberal Democrats calling on Mayor Philip Glanville (Lab & Co-op) to go further in showing his support than his attendance at the 20 October People’s Vote March, which attracted 700,000 people, according to some reports.

Vice Chair of the Hackney Liberal Democrats Darren Martin said: “I have no doubt that Mayor Glanville backs a People’s Vote.

“And although everyone who took part in the historic march on Saturday should be congratulated, he is the directly elected Mayor of one of the most remain places in Britain.

“I’m afraid holding a placard at a march for a few hours is not going to cut it.

“He needs to fight for the people who elected him and use his office to do so.

“He and Hackney Council need to make their position clear by officially passing a motion that backs a People’s Vote on the final Brexit deal with the option to remain.”

In a 20 October Twitter debate with Hackney’s Green party on the topic, Mayor Glanville had stated: “It’s not about letting Labour nationally know or party politics, it’s about taking action from the Hackney Loves You campaign, through marching, to our upcoming event for EU nationals.”

Hackney Loves You is an outreach project by the council which emphasises the importance of EU citizens to the civic, economic and cultural life of the borough.

EU citizens are encouraged to write directly to the mayor sharing their stories, whereupon they will be sent a badge bearing an I Love Hackney logo in the colours of the European flag.

Hackney returned the third strongest remain result in the country in 2016, lagging behind only Lambeth and Gibraltar, with a 78.5 per cent majority voting to stay in the EU.

In direct response to questioning on the topic, Mayor Glanville said: “I will be making the People’s Vote a key part of my speech at Full Council next week and we leave open bringing a motion to the next Full Council meeting in the new year.

“I have been very public in my support for a People’s Vote, indeed and unlike the local Lib Dems was visually there on Saturday. Certainly it’s surprising given all their tweets they haven’t sent any photos from the March.”

Members of Hackney Liberal Democrats, Labour and Green parties were all on the march for a second EU referendum vote on 20 October.