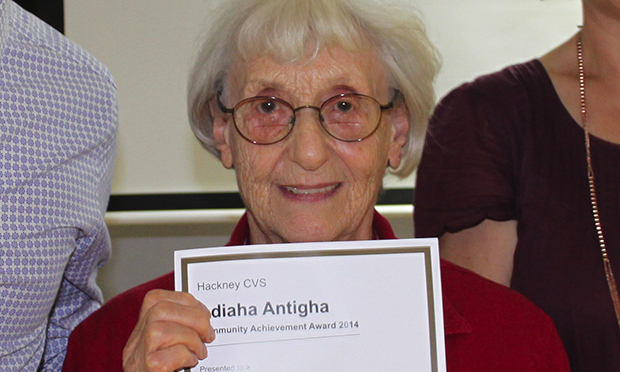 Shirley Murgraff picks up an award in 2014 for her tireless campaign work. Photograph: Hackney CVS

A lifelong Hackney campaigner has appealed to residents to get involved in the borough’s new “Neighbourhoods” model for health and social care.

The Citizen reported in July that Hackney and City of London is to be split into eight new Neighbourhoods, centred around GP practices which look after between 30,000 and 50,000 people.

The plans are being developed by the City & Hackney Clinical Commissioning Group (CCG).

Dr Stephanie Coughlin, local GP and Clinical Lead for Neighbourhoods at the GP Confederation, said in July: “We see the [Neighbourhood] map as including not just GP practices in the future, but also being based around community assets and centres that would feed into it.

“Residents will be a key part and a key driver of the new model.”

Eighty-seven-year-old Hackney campaigner Shirley Murgraff is a member of the scheme’s steering group for patients and residents.

She says the panel will ensure residents have a voice in “all aspects of decision-making about the changes, which are designed to improve the services delivering our health and social care”.

And she has urged people to get involved.

Murgraff said: “Our first request is for them to vote on Healthwatch Hackney’s website for one of four choices on the name for their Neighbourhood – the most popular of which will be decided by 31 November.

“In the interim we are using the geographical location – South West, North East, for example – plus A or B.”

As part of a pilot, the steering group is inviting residents in South West A to register on Healthwatch Hackney for an event at which they will be able to give their thoughts about issues in the neighbourhood.

The meeting will take place at the Tomlinson Centre on Wednesday 31 October from 5.30-7.45pm – light refreshments will be provided.

It will be the first in a series of engagement events in each of the borough’s new Neighbourhoods.

Murgraff said: “Residents will help shape the new Neighbourhood Care Model by telling us what they think the issues are in their Neighbourhood, and how their health and wellbeing could be improved.

She added: “Their input will make a difference and is vital for the success of these changes, so we very much look forward to seeing you. And get voting!”

The design of the new Neighbourhoods has been built around evidence from the National Association of Primary Care (NAPC) Primary Care Home model.

The idea is to make areas large enough in scale to provide a range of services, but small enough to understand and respond to specific health and care needs.

Murgraff was given the Adiaha Antigha Mandela Award by Hackney CVS in 2014 for her campaign work.

Over the years, she has fought against NHS privatisation, fascism, McCarthyism, apartheid and the Vietnam War.