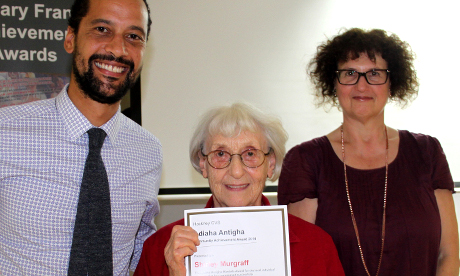 Shirley Murgraff has not got this far without a little perseverance, and a lot of anger. The 83 year-old lifelong campaigner is no stranger to acting out in the name of a cause.

In 2012, at 81, having padlocked herself to fellow protestors, police carted her off by her hands and legs from a Parliament Square protest against the Government’s NHS reforms.

The tireless octogenarian, raised above a grocers’ on Lauriston Road, has now been recognised by Hackney Council for Voluntary Services (CVS), who have awarded her the Adiaha Antigha Mandela Award for her campaigning work.

“Being angry has kept me going,” she said in her acceptance speech.

“It took me a long time to realise that there are some things that it’s okay to be angry about.”

The NHS is a public service about which, among her life’s various crusades, she feels
particularly protective.

A teacher for 27 years, she’s made another life’s work of preventing what she calls “the end of the NHS as we know it.”

Murgraff remembers a time before the National Health Service existed, when, following the Great Depression, poverty was endemic and health treatment was an expense that could not be taken for granted.

The value of the NHS lies “in the whole concept of it. Everyone is paying into a kitty so that if one person is ill, everybody is making a contribution. I would describe the NHS as one of the most civilised and civilising institutions this country has ever set up. And you know, people don’t realise but they aren’t half going to miss it when it’s gone.”

Murgraff’s latest project is a campaign to eliminate the Private Finance Initiative (PFI), a scheme which uses private capital to fund public services.

According to ‘Drop the NHS Debt’ website: “NHS hospitals have entered into long-term agreements with investment companies to finance the building and maintenance of hospitals. These hospitals are then leased back to the NHS Trusts at excessive repayment rates.”

As part of an umbrella group, the campaigners are organising a conference in November to explore the research into profits made by PFIs. Their aim is to get political parties to commit to the legislation in the run-up to the May 2015 elections.

“We hope that what we’re doing will start a big campaign to let people know what’s really happening. It’s hard to know whether we can win, but it’s possible.”

As a true die-hard activist, Murgraff won’t let an achievement award convince her that her job is done: “There’s still lots of people who don’t know what’s happening to the NHS and aren’t worried about it. I’m still desperately worried about it.”

Murgraff joined Hackney’s first Community Health Council in the 1970s, a pioneering service helping to give a voice to service users.

She initiated the first patient advocacy and interpreting service, both of which were taken on for mainstream funding by the Primary Care Trust, the organisation then running health services.

The spirit of campaigning has run through Murgraff’s veins from a young age. At five, she watched her two elder brothers force back the march of the fascist Oswald Mosley and his Blackshirts in the Battle of Cable Street.

She has campaigned against fascism, McCarthyism, apartheid and the Vietnam War.

Murgraff has also been recognised for her work on Holocaust education. In 1983 she wrote the renowned teaching materials accompanying the UK’s first holocaust exhibition, which was described as ‘the biggest anti-racism exercise in the East End’.

Following rave reviews from the Times Educational Supplement, they were commissioned for mainstream use in schools worldwide.

Teaching the Holocaust “distils the lessons that no other single subject anywhere through the twentieth century can,” says Murgraff.

Aside from two years spent in Sussex establishing the first university health service, and a stint working for the International Union of Students in Prague, Shirley hasn’t strayed far from where she grew up on Lauriston Road.

From there, she has cast a wide net, and made sure her voice is heard.