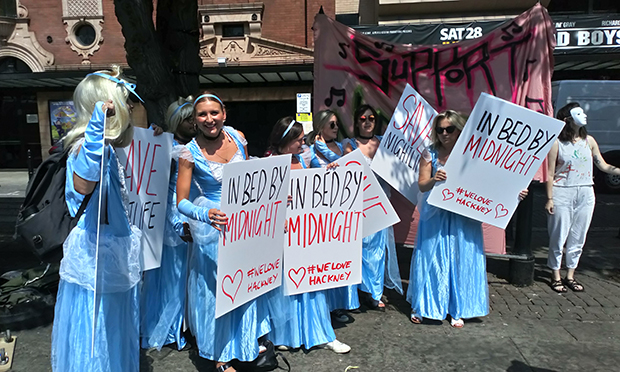 Going to the ball: Cinderella protesters at Hackney Town Hall

Protesters braved temperatures of well over 30°C to voice their feelings on new licensing restrictions imposed by Hackney Council.

The policy has garnered national attention since its unanimous approval at a Hackney full council meeting on Wednesday 18 July.

Included in the restrictions is a “core hours” clause stating new venues must close at 11pm on weekdays and midnight on weekends.

At the protest at Hackney Town Hall yesterday afternoon (27 July) organiser Jo Alloway said: “This decision is very much against the will of the constituents of Hackney. Most people have
responded to this decision in its reviewing stages that they didn’t want it to happen.

“We’re here to show that people are willing to stand up against the decision and show solidarity against something that directly affects a lot of people.

“It’s going to change the dynamic of Hackney drastically. Hackney is renowned for its diversity and its nightlife – it’s something people specifically come to Hackney for.

“Each venue is a hub of community, whether that’s LGBTQ nightlife, Caribbean nightlife – it’s a safe space where people can enjoy their own culture.

“Reducing the core opening times affects the way in which people can create those hubs. It will also put existing venues in a really precarious position, because where there’s a risk of a venue closing down, reapplying for licensing is going to be more difficult.

“The word gentrification is used very loosely a lot of the time, but the message these shifts in the urban landscape send is that Hackney’s priority is getting the right type of person into the borough, people who can afford big apartments, and catering to their needs, instead of to the existing community.”

Organisers then led the crowd in a chant: “Hackney nightlife’s under attack – what do we do? Stand up, fight back!”

The protest was organised on Facebook through the group Support Nightlife! Protest Hackney Council, and was supported and attended by representatives of campaign group We Love Hackney.

Philip Glanville, in a Guardian article on the morning of 27 July, had criticised We Love Hackney, saying: “[Hackney Council] have come under fierce attack, especially on Twitter, in particular by the We Love Hackney campaign, which has, unfortunately, spread some ideas that are simply not true about the impact of the policy… Campaigners suggest it’s a blanket policy against all new venues, or a curfew. It’s not. They suggest that everything in Hackney will shut at 11pm. It won’t.”

Responding to the criticism at the protest, Matthew Sanders, spokesperson for We Love Hackney, said: “We say, speak to any licensing lawyer, anyone who has sat on a licensing committee, and ask them if this will function as a ban.

“They’re saying that it’s not a blanket ban, but what council has ever specifically brought in a policy which they do not intend businesses to have to follow?

“The council seems to think that Hackney has become what it is by accident and there is nothing the council can do that will ever stop that. The fact is it took a lot of hard work and the council meddles with that at their peril.

“In supporting this protest, I hope we have achieved what we have set out to do – to give a voice to a bunch of people who are just not being heard.”

Sanders remarked that Hackney’s nightlife could be argued to have been the direct beneficiary of similar licensing restrictions having been instituted in Soho by Westminster City Council in 2003.

However, Cllr Caroline Selman, Hackney’s cabinet member for community safety, policy and the community sector, spoke out in the wake of the protest to defend the policy.

Selman said: “The updated policy will not affect existing businesses and is not a blanket ban on all new venues – we will consider all new applications on a case by case basis. The policy simply puts the onus on new applicants to demonstrate that they understand the pressures in each area and that by opening later their businesses will not have a negative impact on the area. We will support them to do this.

“We are committed to and fully support our night time economy. The existing Special Policy Area in Shoreditch has been in place since February 2005 and in that time, there has been an increase in the number of licensed premises – we can and have granted licenses in these areas. Our approach is not unusual, there are 72 Special Policy Areas across London.”

Campaigners have pointed out that the council’s decisions on licensing were made despite a public consultation with a majority of negative responses to the ideas.

In a tweet on 20 July, Cllr Emma Plouviez (Lab, London Fields) appeared to cast doubt on the validity of the consultation, saying: “Respondents to online consultation were 67 per cent male; 82 per cent aged 25-44; less than 3 per cent disabled; 95.9 per cent have no caring responsibilities (not parents or carers); 81.6 per cent. Absolutely not representative of Hackney’s population.”

When quizzed by the Citizen, the council stood by the consultation and resulting policy.

A council spokesperson said: “The consultation is valid. The demographic breakdown of consultations’ responses is considered when policy-setting. The council routinely uses a range of different approaches and channels to try to ensure people are aware of a consultation and able to respond.

“The new licensing policy adopted last week aims to strike a balance between a growing night-time economy, the interests of the residents who live nearby and the impact on our increasingly stretched public services.

“We have listened to the concerns of the protesters. We stand by the policy.

“The Mayor of Hackney, Philip Glanville spoke with the Mayor of London’s Night Czar Amy Lamé this week, and the council will monitor and review the impact of these licensing changes and ensure all those who care about the issue are involved in these discussions.”

In response to protesters’ claims that the policy sends the message that Hackney caters to the needs of wealthy residents, a council spokesperson said: “Not true.”

← ‘Trapped in our homes’ – London Fields residents’ fears over barbecue air pollutionWhen we hear the words, ‘black man’, what comes to mind? →