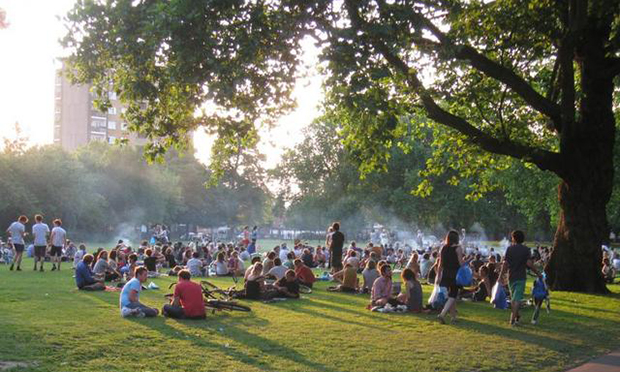 Up in smoke: London Fields BBQ_area

Residents living close to London Fields’ BBQ area are up in arms over the sheer volume of smoke from the barbecues billowing into their homes.

Gary Bryan first raised the alarm after testing the air quality outside his flat on Lansdowne Drive.

Footage posted on social media on 22 July shows a PM2.5 particulate level with ‘hazardous’ highs of over 350µgm-3. The Department for Environment, Food & Rural Affairs (Defra) defines a 24-hour mean average of 71µgm-3 as ‘very high.’

In an interview with the Citizen, Bryan said: “When the wind blows in the direction of my flat at peak time, it averages 400µgm-3 which is motorway level, and way over the safe limit.

“Showing these readings are our latest way of getting something done, because the council haven’t really been listening.

“I think they put the barbecue area in place because people were having illegal barbecues in the park, but they didn’t think it through. They’re 15 feet from people’s windows, and when you’ve got thousands of people on that patch of grass on a really hot day barbecuing, it’s really awful.

“We can’t open our windows, and we feel trapped in our homes.”

Bryan, who has lived in the area for 20 years, added that he suffers from heart failure and asthma, making it a potential necessity to move away from the area unless the situation improves.

In the Citizen’s interview, Bryan said that following a meeting with Deputy Mayor Cllr Feryal Demirci, who is cabinet member for neighbourhoods, transport and parks, he had been invited to participate in a review of the issue in October.

Cassidy said: “I have yet to meet anyone in the neighbourhood who is not upset by the constant smoke from the barbecue area, not to mention the noise, massive crowds, anti-social behaviour, trash, destruction of the grass and generally disrespectful behaviour like public urination and defecation and drug use.

“I’m tired of feeling like my home is a prison. I’d really like to be able to have a window or two open during the day, and now I’m terrified that my newborn son’s health is at stake.”

Dean Wei, Cassidy’s husband, said: “To the council’s credit, they’ve agreed to install an air quality monitor in our garden. Of course, this probably means any meaningful urgent action on the barbecues will be months or years away, as the Council will want to gather data and analyse it.

“We now have a baby who’s just come home. Our house backs on to the barbecue area, and we’re concerned about our son’s developing lungs. We haven’t been able to open our windows to get any air, and the temperature inside gets up to 30°C, which is dangerous for our infant.”

London Fields residents have also made positive suggestions to address the situation.

Ivor Benjamin, Chair of the London Fields User Group, said: “There are at least seven other parks in Hackney as big or bigger than London Fields. A barbecue area could move around for a few years at a time between each park.

“If the council were serious about pollution – and they seem to be when it comes to closing roads and trying to protect schools – they would have banned the barbecues the minute they learned of the potential impact of barbecue smoke on health – why are they not doing this?

“The barbecue area is a great cost to the health of everyone living around the park – or using it, or or barbecuing on it – and even those council employees who enforce it, who are not issued any breathing protection.

“I’ve spoken to members of the Hackney Enforcement Team who patrol the barbecue area at weekends who have complained of stinging eyes and throats, as well as breathing difficulties.”

The council suspended the use of all barbecues in London Fields on 25 July, following London Fire Brigade advice to prevent outbreaks of grass fires during the recent record heatwave.

A council spokesperson said: “The council met with a resident this week to discuss their concerns regarding the barbecue area.

“The council has installed a second air quality monitor in London Fields to better monitor the impact on residents adjacent to the barbecue area. Particulate matter monitoring is in place on Lansdowne Drive adjacent to the BBQ area.

“We have not had any reported complaint/accident from staff about smoke inhalation relating to barbecues at London Fields. A risk assessment has been conducted for the park as a whole, including the barbecue area.

“The current suspension of the barbecue area has been brought in directly in response to the London Fire Brigade’s (LFB) request. In the unlikely event that the LFB lifts this request during the summer period, the council will review the situation again.

“The allowance of barbecues in London Fields is considered on an annual basis and will be reviewed again at the end of this year.”

In a statement on the current ban, Deputy Mayor Demirci said: “Currently the use of all barbecues in London Fields is suspended, following the warning issued by the London Fire Brigade on 25 July, to suspend the use of barbecues in public parks due to the current high risk of fire.

“We would urge all residents and visitors to Hackney to comply with the fire brigade’s request without the need for enforcement and not use barbecues in any parks or green spaces in the borough. An annual review of the barbecue area in London Fields will be completed as usual later this year.”

Recently a mystery resident even went so far as to attach faked council signage around the barbecue area, citing it as an ‘ultra high emission zone.’

On the sign, the spokesperson added: “It is unacceptable for a member of the public to put up a sign purporting to be the council, the sign has now been removed.  Action will be taken against any type of fly-posting which is not allowed.”

Hackney Council’s advice on barbecues in parks can be found here: http://news.hackney.gov.uk/statement-following-london-fire-brigade-barbecue-advice/