Hackney Council has conceded it underestimated how much traffic will end up on Stoke Newington’s Church Street as a result of its controversial road closure plans – leading campaigners to again call for them to be scrapped.

The council has proposed closing up to four cut-throughs in the Walford Road area, but critics say this would result in more cars and worse pollution on nearby Church Street.

The Town Hall’s consultation predicted 564 extra vehicles a day would use the road, which is home to William Patten primary – already one of the 50 worst polluted schools in London.

But opposition from campaign group Clean Air 4 Schools (CA4S) led the council to postpone a decision on the proposals so it could carry out further analysis on their potential impact on traffic and air quality.

New but unfinished data now puts the council’s estimate at 2,080 extra vehicles per day on Church Street, an increase of 21.8 per cent – closer to CA4S’s original calculations.

But the council says this figure will come down because the data, released by campaigners, does not yet include assumptions about traffic evaporation – drivers who will find alternative routes – or those who will use a different mode of transport.

The Town Hall claims all parties are aware of this and had agreed that the inclusion of the missing data will significantly reduce the final traffic flow assumptions.

Not so, according to CA4S, which released a statement saying: “Sadly, ‘evaporation’ of traffic will not change substantially the overall figures for Church Street.

“During discussions with CA4S, the council agreed to test three cases – one with 0 per cent evaporation of the traffic that currently uses the cut through, another at 5 per cent and a best-case scenario of 15 per cent.

“That still equates to an overall traffic increase for Church Street of between 18.5 and 21.8 per cent.”

Local resident Matt Petzny said: “Given the council didn’t fully understand the impact of its proposals, I hope it will now do the right thing, scrap these road closures and come up with properly considered plans that make the whole area safer and more pleasant for pedestrians – Church Street included.” 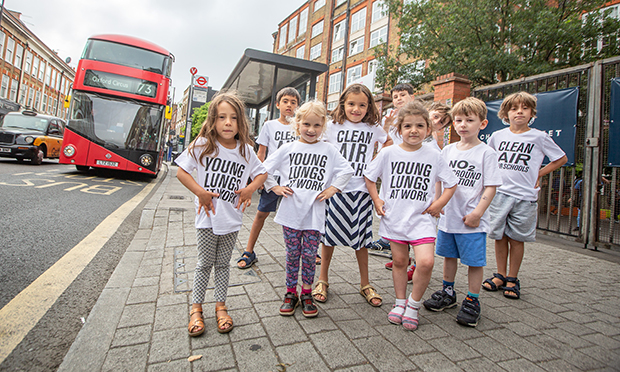 Getting shirty: a group of kids make a stand on Church Street. Photograph: Jamie Smith

The petition’s creator, Heidi Early, who runs Earlybird Cards, said of the new figures: “We’re horrified that senior officials have got it so badly wrong.

“If traders and residents had been told the true impact for Church Street when the council consulted in January, I imagine opposition would have been far higher.

“Church Street isn’t equipped to deal with the extra traffic these closures would generate, the pavements are very narrow in places which means it’s already hazardous to pedestrians, at times congestion is terrible and pollution is so bad that some days you can taste it.”

The spokesperson for CA4S, which recently changed its name from Clean Air for William Patten to reflect an influx of new members from St Mary’s school and local nurseries, added: “Hackney Council admits pollution levels breach EU limits at St Mary’s and their pollution officer and air quality consultants for the Mayor of London suggest closing a section of William Patten’s playground.

“For Hackney to knowingly worsen this already harmful situation is completely immoral.”

Hackney Council disputes the findings of campaigners, as well as a recent Greater London Authority report, that dirty air levels at William Patten are already in breach of National Air Quality Objectives.

Commenting on the newly released data, a Town Hall spokesperson said: “We are committed to making Hackney’s roads safer for everyone, and the proposed road closures in Stoke Newington are part of wider changes aimed at creating an environment that will encourage more walking and cycling and improve air quality.

“Following various feedback during the consultation we decided to re-analyse the traffic flows to get a more detailed assessment of the impact that they will have on air quality in the area.

“We have worked closely with CA4S throughout this process and have been clear that we will only make a final decision on whether to go ahead with the changes once their expected impact is fully understood.”

The council’s transport chief and co-deputy mayor Feryal Demirci said in January that the original estimate of 564 extra vehicles a day on Church Street was a “worst-case scenario” and “should not result in any appreciable worsening of air quality outside the school”.

The council did not respond to a request for a response from Cllr Demirci on the new estimate.

A spreadsheet with the latest data can be dowloaded here