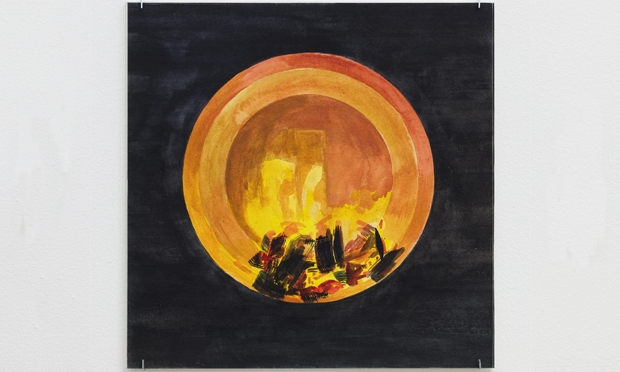 Magnus Gjoen describes himself as an “accidental artist”, in reference to the strands of his life that have fallen into place to make this solo exhibition a reality. Following his study of both fine art and fashion design at university, he chose fashion early on in his professional life, working with famed brands like Vivienne Westwood and Lee Jeans. This no doubt gave him the financial clout to buy the 21 original engravings that illustrated the French version of Milton’s Paradise Lost, from 1863.

In Le Paradis Perdu, Gjoen recontextualises these romantic 19th century images in ways that spring from the macabre (Gjoen frequently uses skulls and heart motifs, such as on the cover of this month’s Review) to impudent, graffiti-like modifications. His is fine art tweaked for Tumblr and primed for self-parodic consumption, with a pop aesthetic that stretches to ornate skateboard designs and ceramic Uzis. Until 15 July 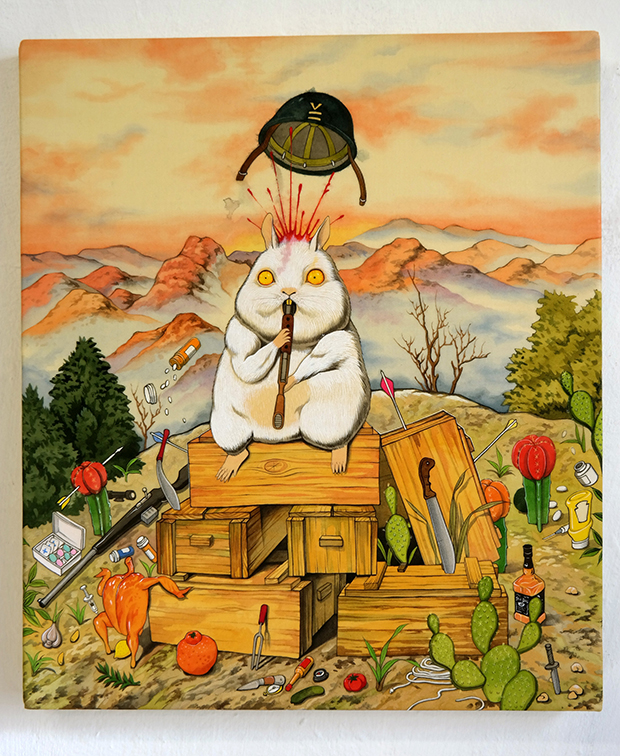 Sticklers may refer to this as the 2018 Bow Arts Open Show, but sloganeering artist Mark Titchner is in charge of this year’s curation, so if he wants to call it a ‘rave’ then a rave it will be. The title is actually pilfered from a piece by exhibiting artist Lena Brazin, whose open and thoughtful oil painting will be on show alongside the work of 23 other London artists.

The theme is ostensibly power struggles and nationhood, but many of the works simply articulate the natural human reaction to what Marcus Orlandi’s contribution calls these ‘bloody awful’ times (his Everything is Bloody Awful So I Made You this Hapless Rainbow is exactly what it says on the tin.) There’s a pleasing range of frustration and despair on offer – from Hun Kyu Kim’s suicidal bunny soldier (A crown for the king; see above) to the consuming darkness and hidden colour of Miraj Ahmed’s The Void is Everything. From 6 July until 26 August 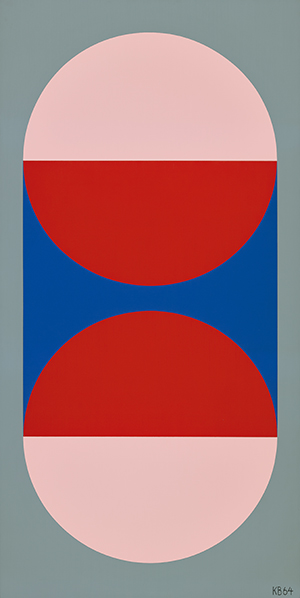 Perhaps, like me, when you hear that there’s to be an exhibition on “the diverse forms of abstraction taking place [on] USA’s West Coast in the 1960s”, you wonder if it’ll just be pictures of trust-fund hippy musicians absolutely spangled on psychedelic drugs. We clearly both need an education on California Hard-Edge painting, and that is exactly what Flowers Gallery is aiming to provide this month.

A reaction to the ‘leave it all on the canvas’ approach of Abstract Expressionism, the Hard-Edgers preferred sharpness, clarity and Mondrian-esque geometry. In giving us this rare chance to sample works by three of the masters of this colourful form, Flowers are also sending some British examples of Hard-Edge to Louis Stern Fine Arts gallery, West Hollywood, California (my request to review this half of the show in-person fell on deaf ears.) From 5 July until 8 September

Following Molly Soda’s Me and My Gurls, the Annka Kultys Gallery is hosting another digital artist whose work would be literally unimaginable mere decades ago. Where Soda utilised her internet presence to bring viewers inside her personal Panopticon, Dominic Dispirito is concerned with how others are viewed and vilified, namely the British ‘chav’.

Lurid is the word to describe some of Dispirito’s iPhone-driven, cartoonish creations, like Pissing up the wrong tree and Gurrrrrrttttccchhhyaaa, sling your hook. However, sympathy and humanity are barely hidden under the surface – given the artist’s own working-class background, images like Love on the dole have an ‘us against the world’ snarl. His Warhol-like variations of the Pearly Queen of Hackney are of particular local interest. Until 15 July

Oscar Tuazon’s sculpture projects often sit right on the boundary of art and activism – not least after his time spent at Standing Rock, North Dakota, camped with those brave souls fighting against the Dakota Access Pipeline. He told The Art Newspaper that, while he hadn’t been “so deeply involved in politics” before, Native American water rights “really spoke to [him].”

His experiences there, building tents and temporary structures, only deepened his preoccupations and skills working with the elemental forces of water and fire. Tuazon is especially keen that his work has real-world applications, particularly his more architectural pieces. (One of his trademarks is based on the shell of a pioneering 70s eco-home.) And so we get to this debut solo East End exhibition, full of reminders of our deep human connection to fire, and partly dedicated to raising awareness of the jailed Native American activist Leonard Peltier. Until 29 July