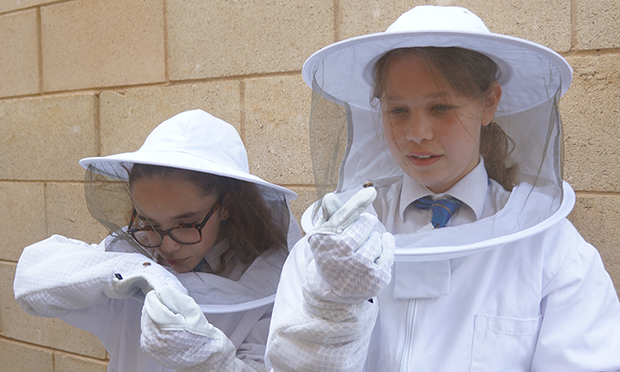 High summer is exam season, with students in schools across the country now in their final industrious stretch of studies before the holidays.

Pupils at Hackney’s Petchey Academy will be no exception – the school will have been humming with activity as its students, aged between 11-19, tackled their full plate of GCSEs, AS- and A-levels.

The academy is proud host to a colony of bees.

Jayne Nelson, Petchey Academy’s communications manager, said: “We have had beehives on the roof at the academy for over a year now.

“The bees have been fed sugar syrup to help them settle into the hives and to provide them with energy to pull out the new wax foundation.

“The queens have been laying eggs, new bees have hatched and the size of the colonies has already increased.

“Unfortunately, we will have to wait until summer 2019 before harvesting any honey, as the bees need it more than we do!” 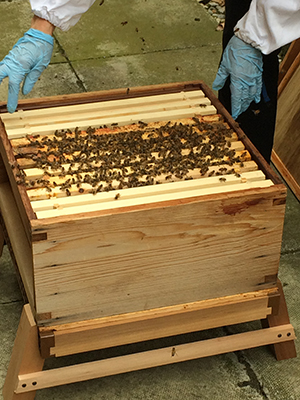 Petchey’s Beekeeping Club, run by school librarian Fiona Kirk, brought in its two new nucleus colonies from Walthamstow – the advice to all aspiring apiarists being to buy local, but not too local, as the bees could decide to return to their original hives.

Over the coming months, Petchey students from Years 7-9 will be working with Buckfast bees, a species specially bred for their gentleness and productivity.

The new airborne residents couldn’t have picked a better location to move into for their new home – Hackney is a particularly desirable location for the pollen-loving insects.

The borough is home to a number of different species of solitary bee and bumblebee, some of which are classed as nationally rare.

Both the brown-banded carder bee (Bombus humilis) and the hairy-footed flower bee (Anthophora plumipes) have been spotted in Hackney.

The Club will be providing its charges with an oasis of security at a time of uncertainty for bees worldwide.

While there is no full agreement on the causes of colony collapse disorder (CCD), bee experts have been warning of sharply declining populations for well over ten years.

Over a third of UK food supplies are dependent on bee-driven pollination, according to the British Beekeeping Association.

The potential catastrophe that their disappearance would cause has prompted a corresponding rise in bees’ status on the political agenda, prompting European Commission president Jean-Claude Juncker to declare himself the “bees’ man” last year.

There is increasing agreement that so-called neonicotinoids are part of the problem: pesticides which are thought to harm bees’ natural pollen-gathering skills, as well as their navigation and communication abilities.

One Royal Holloway London study from 2017 found that queen bees exposed to real-world levels of neonicotinoids were 26 per cent less likely to lay eggs to start a colony.

The continued efforts of Petchey’s students to keep and maintain their new guests will mean that, in this corner of Hackney at least, bees will be able to rest a little easier in their hives – or hopefully, become busier than ever before.