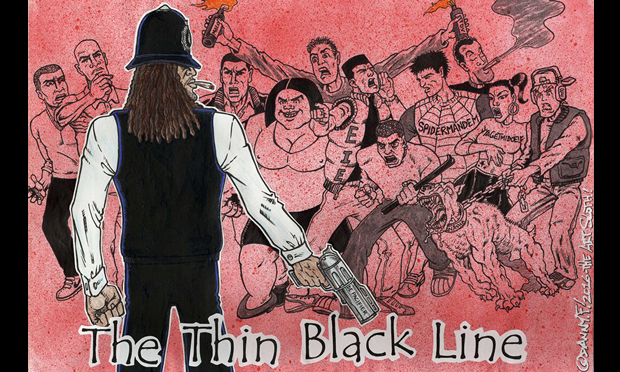 Scotland Yardie (one of the characters from Skank magazine revived for a recent graphic novel) as drawn by Perspectives participant Danny F. Image courtesy of the artist

This two day ‘pop-up exhibition’ in an unassuming N16 rehearsal studio is shaping up to be a rip-roaring multimedia celebration of local black art. Danny F (for Francis) in particular is a Hackney comic gem – his contributions to 90s black satirical magazines Skank (shut down by a Linford Christie lawsuit) and Black Eye (sample headline: “‘I’m the double of Craig David,’ says ugly man from Hackney”) aren’t easily forgotten.

Fresh from taking over Ryan’s Bar with his Skank Collective as part of the Stoke Newington Literary Festival, he’ll be exhibiting at Reel Rebel, along with the multitalented Carleen De Sozer (whose street art can be found all around the Ridley Road area) and up-and-coming South African Lindo Khandela – whose Twitter bio reads in part “Zulu warrior who picked up a paint brush”. Keen to ‘[break] with art convention’, this’ll be no staid chin-stroker – non-wall mounted highlights include performance art by Demelza Toy Toy; firsthand Windrush testimony from artist/poet Rachelle Romeo, plus a licenced bar and Caribbean food across both days. 8 and 9 June

Stanley Donwood is best known for his work with Oxford’s finest (unless you prefer Supergrass), Radiohead. From The Bends’ CPR-dummy cover star to Hail To The Thief’s sloganeering cartography, Donwood (real name Dan Rickwood) has been credited for all of the band’s artwork since 1995, often working with lead singer Thom Yorke under his pseudonym Dr. Tchock.

Despite many fans assuming Donwood was a fiction – perhaps a name for the collective band’s work, or Yorke himself? – he has emerged from the shadows in the last decade, and his website is filled with info on projects like his series of books, his collaboration with Oxford’s Natural History Museum exploring the ancient Wytham Woods, and exhibitions of his art around the world. At Shoreditch’s Jealous East, screenprints will be the focus: giving all a chance to own a piece from previously sold out ranges (including those Hail To The Thief city maps) or even a brand new print of his, made at Jealous’ own studio. From 7 until 24 June 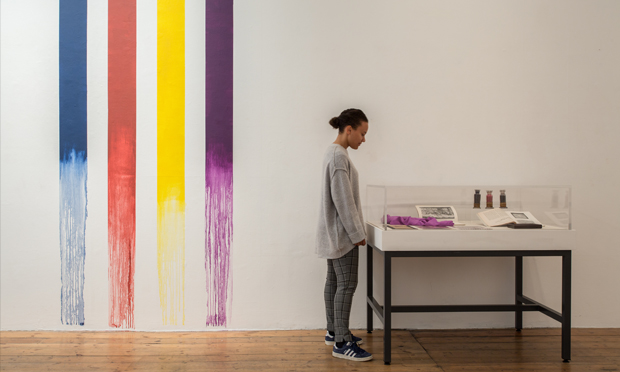 In recent times, you’re more likely to see a disastrous oil spill flowing up the River Lea than any more useful, less crude raw materials. The local textile businesses have now mostly up and left for Essex, continuing the centuries-old migration radially outwards from the London’s crowded centre. But it wasn’t always this way – well into the 20th century, the Lea and its surrounds were a conduit for all sorts of fabric and finery, from silk-weaving and jute spinning to printing on calico and all sorts of other materials.

This year’s edition of the Raw Materials project at Bow Arts’ hones in on this topic with the help of some impressive acquisitions – including a spinning wheel donated by none other than Mahatma Gandhi, who stayed a spell in the area in 1932. The textile industry is also represented in more abstract style, courtesy of new work from artists Freya Gabie and Sarah Desmarais, which uses the strands of cotton and the strands of the River Lea itself as inspiration. Until 24 June

Both artists, in the new exhibition at Andor (a gallery space near Columbia Road that hosts ambitious shows by exciting emerging artists) are Masters students at the Royal College of Art – Self: Contemporary Art Practice; Blomfield: Painting. Blomfield in particular relishes using her control of form and her exceptional palette in the service of others’ words – “I’ve always had the impulse to use other people’s writings…I make paintings based on a certain number of limitations or systems that I create, or have to meet,” as she told Jerwood Visual Arts, where she earned a Fellowship.

So to build their Chrome Villa, the pair commissioned a text from experimental writer Jennifer Boyd, entitled Night Box. The claustrophobic, 8000-word stream – of Cronenbergian imagery, and ideas of disintegration and mutation into a cold, all-consuming chrome future – outlines the themes. “we’ve got to get to chrome villa,” it reads, “i want to breathe out and for mercury to choke me while i look at the lack of stars.” Blomfield and Self are equipped, through painting and Self’s work transfiguring other objects like North Face tents, beached plastic, and a discarded TV aerial, to create that world. Until 29 June

The latest exhibit coming to Catherine Borowski and Lee Baker’s gallery in a yellow 8 yard skip came out of Richard Woods’ contribution to 2017’s Folkestone Triennial (six brash, childlike graphics of 3D houses, placed around the town) and an epiphany. “I had been filling a skip with all the leftover material that we had used to build the Holiday Homes on the Folkestone Harbour Arm,” explains Woods, and it struck me how potent an image it made – having bits of window or chimney poking out of the skip.” A serendipitous phone call from Baker extolling the virtues of his skip later, this new show (the third for Skip Gallery in the Hoxton location, following on from David Shrigley and Gavin Turk’s contributions) started to take (geometric) shape.

Sure enough, Woods’ house will be poking out of the refuse all month, and viewers can commemorate their visit by buying a bespoke print courtesy of The Private Press. The Skip Gallery team are also currently working on a new, perhaps even stranger concept – ‘Skip Lite – Gallery in a bag.’ From 1 until 30 June