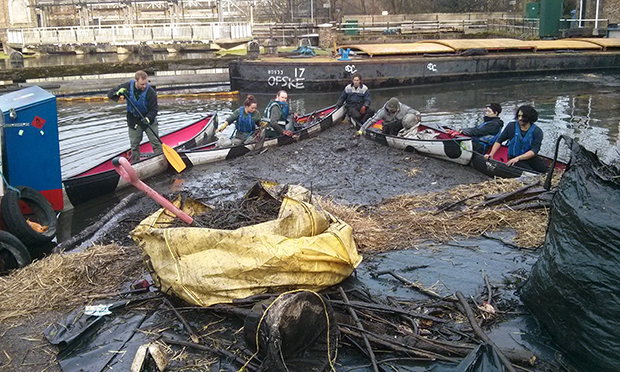 Clean-up: volunteers use canoes to cordon off the oil. Photograph: Lea Boaters Collective

Eleven charities and campaign groups are demanding answers over the handling of the River Lea oil spill – which is yet to be cleared after starting over a month ago in the Pymmes Brook tributary.

A joint letter claims the “slow emergency response” of both the government’s Environment Agency (EA) and waterways charity Canal & River Trust (CRT) has contributed to the “worst incident of waste crime in recent history”.

It lists a number of alleged failures, including a lack of communication and resources, and says waterways were not closed quickly enough to prevent the oil from spreading.

The group wants EA and CRT to explain “why an environmental disaster was neither acted upon immediately, nor respective actions clearly communicated”.

An accompanying petition launched last week has been signed by more than 2,600 people.

But the chief executive of CRT, whose purpose is to “to act as guardian for the canals and rivers of England and Wales”, said the charity has “little direct responsibility for, or the resource and expertise, to deal with an incident of this scale”.

CRT said it is contacting the organisations that signed the open letter to discuss their concerns in more detail.

An EA spokesperson says the clean-up operation is “coming to the end”, and its environment officers have identified a potential source of the spillage. 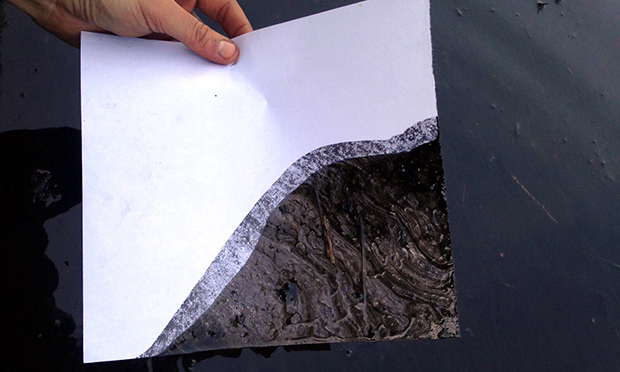 Damage: a piece of paper shows the depth and thickness of the oil. Photograph: Lea Boaters Collective

The open letter from the eleven organisations says 30 swans and waterbirds have been rescued, but that many other animals have died.

It goes on to state: “Local residents, businesses, rowers, walkers, tourists and live-aboard boaters have been subject to harmful fumes, along with the sight of dead and contaminated wildlife – not to mention the toxic waste itself.

“Some local river-based businesses and organisations have had no option but to cease operations during this time.”

The group says there has been no clarity about the responsibilities of EA and CRT, no evidence of a strategy, insufficient briefing of CRT staff and volunteers, no clear communication with boaters and rowers, and a lack of clean-up resources.

It also says a “failure to close waterways quickly and the premature reopening of Hertford Union Canal led to the spread of the contamination”, and that volunteers are still organising regular clean-up operations with no support from the EA or CRT. 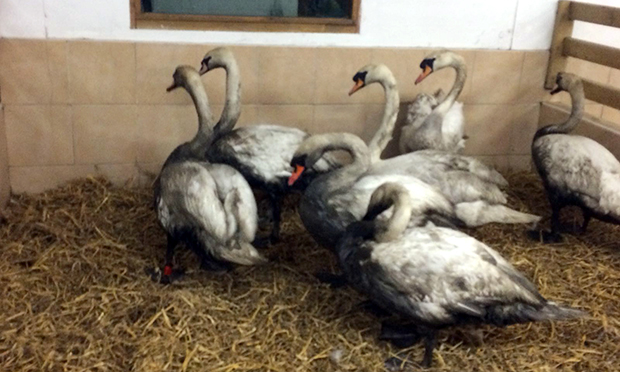 It concludes: “We call on DEFRA, EAC and the EFRA select committee to hold the Environment Agency and the Canal & River Trust to account for their handling of this disaster and to consider whether the agencies are adequately funded to meet their public objectives.”

Richard Parry, CRT’s chief executive, said: “The destruction caused along the River Lea by the illegal dumping of oil is horrifying and unprecedented in scale. We share much of the anger and sadness expressed.

“As the navigation authority, we have little direct responsibility for, or the resource and expertise, to deal with an incident of this scale.

“It’s incredibly frustrating that it’s taken so long to find the source, and we join with those calling for action to prevent pollution like this from entering via Pymmes Brook in future.”

Parry added: “The Environment Agency takes the lead role in dealing with the pollution in the river, and our teams continue to work with them.

“We were onsite to assist the Agency within an hour of the spill being reported and have worked continuously to support the clean-up operation since then.

“We have agreed response plans in place for such incidents and have worked with the Agency to action these, making sure the areas of greatest risk have been prioritised and dealt with.

“We have installed booms, absorbent pads, restricted boat movements to best contain the oil, provided boaters with materials to help the clean-up, as well as organising a series of volunteer events.

“I’d like to thank all the volunteers, whose time and effort has made such a positive difference, for their selfless commitment.”

Parry promised to carry out a review of the operational response to “learn as much as we can”.

He added: “We can’t lose sight, however, of the fact that someone has illegally dumped tens of thousands of litres of oil somewhere further up the catchment of Pymmes Brook, and it has flowed into the River Lea from a waterway we do not manage.

“This is a criminal act and we want to see the perpetrators brought to justice. We have raised our own concerns with partners and are liaising with local MPs. Action must be taken so that incidents on this scale do not happen again.”

A spokesperson for EA, which is charged with “protecting and improving the quality of water” in the UK, said: “We are coming to the end of our clean-up operation on the River Lea. So far, almost 80,000 litres of oily water and significant amounts of contaminated debris have been removed.

“Our environment officers have identified a potential source, which we are investigating. Our officers work round the clock to protect people and wildlife from pollution incidents and are working closely with Thames Water and CRT to investigate what happened.”

The spokesperson urged the public to report pollution by contacting EA’s hotline on 0800 807 060.

You can read the joint open letter in full here

← SPACE is the place: we delve into a new book celebrating 50 years of the artistic engine of East LondonHackney Deputy Mayor to scrap SEND funding changes – but five per cent cuts will go ahead →