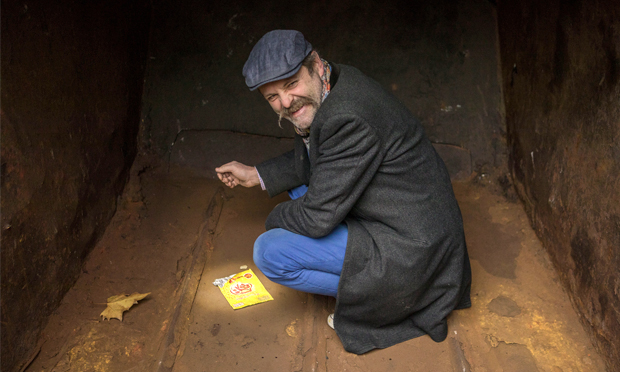 “For me rubbish is really important”: Gavin Turk with Transubstantiation at the Skip Gallery. Photograph: Ali Tollervey

From wedding carriage to improvised half-pipe, the humble skip has been gussied up and transformed on occasion over the years.

Hoxton’s Skip Gallery, run by Catherine Borowski and Lee Baker, is a particularly high profile example of the genre. They hosted exclusive works by David Shrigley in June and now new work by Gavin Turk, a pillar of the ‘Young British Artists’ movement who has previous for erecting playful public art in Hackney.

The piece, called Transubstantiation, consists of a hand-painted packet of Skips brand crisps, on a paper-bag, parked unceremoniously at the bottom of the clanking, bright yellow skip-cum-gallery. It has just had its first weekend run in the parking space opposite number 19 Hoxton Square, and is back today until the end of the weekend. It’s also on sale for £65,000.

I met Turk at the unveiling, who explained the connection between the skip we were stood by and the lonely pack of potato snacks that lay before us:

“[Transubstantiation] is the process of transference of one thing onto another. The classic example is what you get in church, where the little circular bits of bread (which actually, as it happens, are a bit like a skip) represent the body of Christ.

“We had this idea that, well, the Skip Gallery should show Skips – the idea of something showing itself. In a way the object became a kind of tautology.” 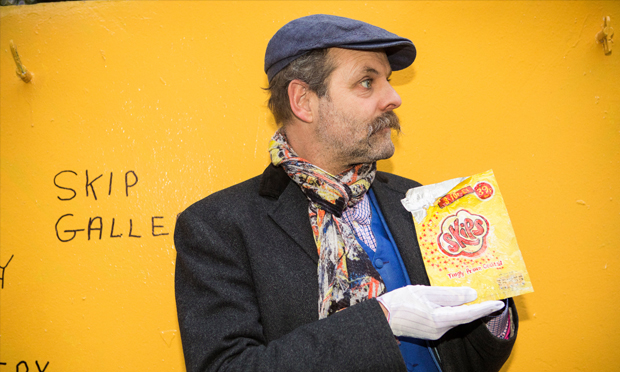 Turk aped Skip’s previous exhibitor in the low-key signage he has created for the show, written in a knowingly Shrigley-esque font. Transubstantiation itself, however, is part of a wider strand of Turk’s own work.

He notes that probably his “most well-known” piece is The Golden Thread, bronze casts of bin-bags, painted to look like bin-bags. (Fittingly, these were once shown by the old White Cube gallery on the very same square.) Skip Gallery’s Lee Baker was drawn to Turk because he remembered his 1998 piece Pimp – a statue consisting of a beautiful shiny, chrome-black skip.

“I’m not sure what the relationship between rubbish and art is,” admitted Turk, “except for the idea of art as something that’s supposed to be ‘culturally valuable’, a cultural distillate. Whereas the rubbish is supposed to be there once all the culture, all the art has been taken away.

“But in some ways, you can’t take culture away… For me, I look back at the rubbish and think “shit, that rubbish can tell us the story of everything!” That rubbish tells us the story of our lives, of what we’re doing at the moment, and how we behave. So for me rubbish is really important, how we present that fact.” 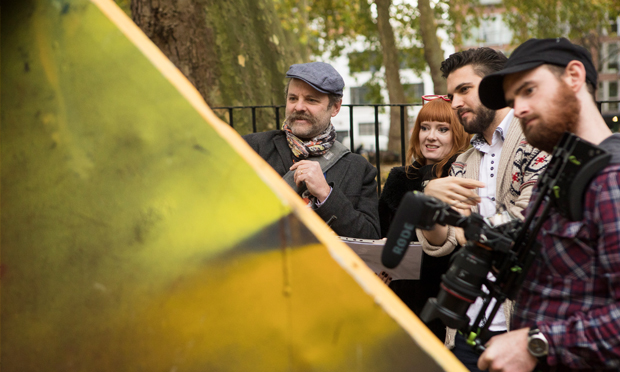 When I peered inside, several leaves had blown into the skip, in a circle around the spotlit packet, in a way that, with the dark night’s sky in full effect, almost looked like a tableau of worship to the crispy gods.

“It’s very dramatic now, with the spotlight on it,” Turk explained, “but during the daytime it just looks like “Is this empty? Oh no, there’s something in there. Oh, it’s Skips. Oh, it’s just the packet. So then it’s also maybe a bit like Pop Art.

“And then it’s also to do with waste, and things moving through a social system – something that gets produced to be eaten, to be consumed, and then to enter the throwaway chain.

“In a way, we can’t get the thing that we want, we just go through a process of consumption.”

Turk, as I mentioned, is often written-up as an archetypal YBA provocateur, and indeed hopes that the work is “irritating enough that, if you do engage with it, you’ll probably fall into engaging with it a lot more than you might do if it was a little bit more fulfilling.” But while he hopes it’s shocking in its “smallness, or in its jokiness”, he also believes that it’s a liberating expression of the ethos of Skip Gallery itself – a worthwhile “experiment” and a “pop-up gallery in a pop-up world.”

Before I left Gavin to enjoy opening night, I had to ask: do you actually like Skips?

* Skips are vegan, although they are produced in a factory that handles dairy and thus have a milk allergen warning.