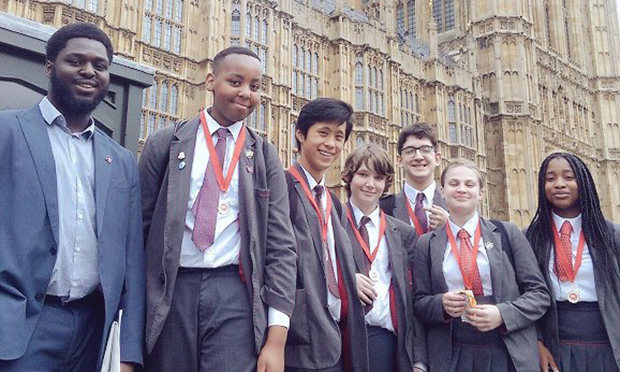 A team of six students from Hackney are celebrating a “phenomenal” achievement after being crowned champions of Debate Mate 2018 – a competition featuring more than 240 schools from across the country.

The result was announced last week following a tense grand final at the House of Lords against a school from Lewisham.

The teams debated whether or not elected politicians should be required to use state education and NHS care for their immediate family.

Reacting to the victory, Katie said: “The experience has been truly phenomenal!”

Incredibly proud of my team for this amazing achievement! @CardinalPoleRC debaters that I’ve mentored for the past year have worked incredibly hard to win the national debate league
Please support @Debate_Mate to continue change lives by voting for them at https://t.co/gHFH4smm5J https://t.co/FISdOjZgEY

The students were mentored by former Cardinal Pole pupil Jesse Williams, who said he was “extremely privileged” to have been invited back and given the opportunity to coach the team for a year.

He added: “To see them win the Urban Debate League was amazing for me as a mentor because I was able to witness the incredible growth of the students over the course of the year – both in terms of debating skills and personal development.”

Philip paid tribute to Jesse, saying: “If you find the right mentor, they give you this better feeling about yourself. They teach you skills you never knew you had, and help you advance what you already know.”

We won!!!!! @CardinalPoleRC is the top UDL @Debate_Mate school! 6000 pupils in the programme and our 6 debaters have WON THE CUP. Could not be prouder or happier. 😱😁😁😁🎉🎉🎉🎉🎉🎉🎉🎉🎉🎉 #teacherlifegoals #hackneykidsrule #debating #oracy @ktdoes @chaenz2k9

Anneka said: “As a school, we know how talented and determined our students are, and it is fantastic that now everyone else can see Hackney pupils as the best in the country!”

Debate Mate is a charity which aims to improve critical and creative thinking, teamwork and leadership skills through the art of public speaking.

The programme provides participants with 17 weeks of extracurricular training from university students, who mentor teams in a series of fun and interactive exercises and games.

For more information about Debate Mate, please visit the charity’s website at debatemate.org