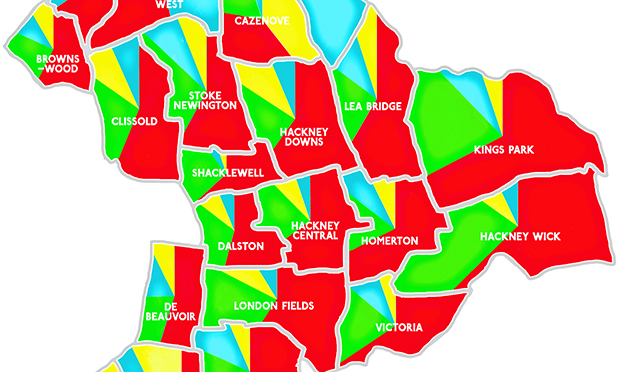 Labour dominated at the 2014 local elections

Labour’s firm grip on 50 of Hackney’s 57 council seats might make it seem like there is scant competition in our local polls.

However, dig a little deeper and you will find that the borough’s electoral geography is quite varied and potentially unpredictable.

The main battleground in Hackney elections remains the north of the borough.

Cazenove ward has historically been the hardest sought after bit of electoral turf in these parts, with seats switching back and forth between the Liberal Democrats and Labour.

All three of the ward’s slots are currently in Lib Dem hands, but Labour will undoubtedly have them in their sites, especially as they were only 22 votes short of bagging a seat here in 2014.

The Liberal Democrats look set to put up an equally strong fight to protect their hard-won ward, so this little piece of Hackney will be the most politically marginal bit of the borough.

Technically the closest contest last time round was in neighbouring Stamford Hill West, however. Labour and the Conservatives each took a seat, but Conservative candidate Bernard Aussenberg came within 13 votes of beating his fellow Tory Benzion Papier.

Having made inroads into Stamford Hill at the last election, Labour will undoubtedly be looking for a clean sweep of Stamford Hill West this May.

Whether they will be successful depends in part on how hard the parties work on the ground, and also on the shifting winds of national party politics.

Springfield is the Conservative bastion that will be hardest for other parties to break into. There was a comfortable 300-vote margin there last time, and the three Tories who hold the seats in this ward – Cllrs Steinberger, Levy and Odze – are all active in the local community.

That said, we could be in for a surprise on 4 May if national-level ructions percolate down to local voting patterns.

This quick tour through the northern reaches of the borough might give the impression that the electoral action in Hackney is all about Labour making inroads into territory controlled by other parties, but a peek further south shows that this is not by any means a complete picture.

The Greens – Hackney’s second party in terms of vote share – have previously held seats in Clissold, and they were only 404 votes short of picking up a councillorship in Dalston in 2014, despite the fact that it was not an area they had especially targeted.

This suggests that with a bit of effort, this heartland of the borough could be within their grasp.

The Greens also traditionally give Labour a run for their money in Lea Bridge; this year the Conservatives look set to work this ward hard too, which could erode Labour’s one-party monopoly.

Finally, recent electoral history suggests that De Beauvoir is an improbable battleground, but it could just be one to watch this spring, as the Liberal Democrats have promised to put in some serious effort in the Islington borderlands, and the changing demographics of the area could bolster the Conservative vote.

Psephology may be a pursuit of the anorak, but discover your inner election-watcher and you could be in for some excitement as the votes roll in.

And if you are wondering whether it is really worth voting, bear in mind that your voice counts more at local level, both because seats are smaller and because fewer people make it to the polls.

Turnout at the 2014 local elections ranged from 31.15 per cent in Hoxton East and Shoreditch to 49.32 per cent in Cazenove.

So get yourself to the polls on 3 May and make a difference.

← Green Party’s Alastair Binnie-Lubbock would ‘give power back’ to residents if elected Hackney MayorRoll up! Roll up! Arcola stage set for Great Mayoral Debate: Hackney Citizen to host election hustings →