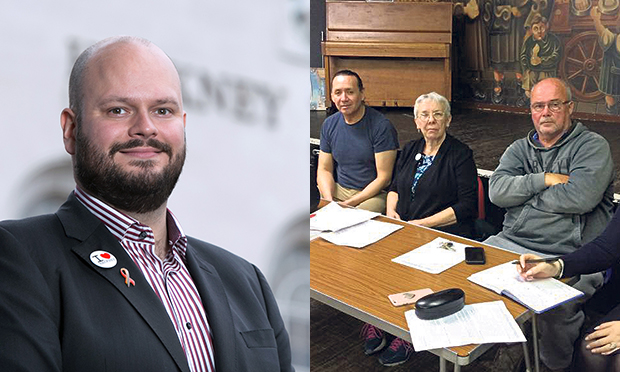 The battle between the council and Save Britannia Leisure Centre (SBLC) campaigners has intensified following a public meeting last week.

The Town Hall wants to build a new leisure centre, along with a school, 400 luxury flats and affordable housing.

SBLC organiser Pat Turnbull described the airing of views as “forthright” but said she was pleased the Mayor accepted the invitation.

Glanville said he “welcomed the opportunity to speak to campaigners face to face”.

But in the fallout, both sides have criticised one another for “misleading” people about the details of the plans.

During the event, campaigners raised concerns over the council’s consultation, the response to which – 400 replies from 6,000 – they claim was “statistically insignificant”.

Glanville hit back at the SBLC petition, which has reached almost 4,000 signatures, and later clarified his answer to the Citizen: “I said that all voices have been listened to, emphasising that the petition, Shoreditch Citizens’ submission and the consultation were taken into account by Cabinet in April 2017.

“I pointed out that there were issues with the petition as the only valid test of opinion.”

Glanville said arguments in the petition are “misleading” and “based on incorrect or outdated information and conjecture”, adding: “For example, the petition states ‘They [the council] say they will include a school, plus a leisure centre – but with no guaranteed information about size, facilities, access, prices etc.’

“This is simply not true –  we have been clear that the new leisure centre will be bigger and have better facilities than the Britannia as well as being accessible and affordable to all.

“At no point has the Save Britannia Leisure Centre campaign sought to correct the misleading information in the petition.”

But Turnbull said the campaign “does not accept that our petition is misleading”, telling the Citizen: “There is no certainty about what will be in the replacement leisure centre, despite the council’s attempt to say that there is.

“It is the council that has been misleading from the start by deliberately underplaying the luxury housing that will be where the Britannia stands now.

“Even now there are people who believe the Britannia is simply going to be refurbished, because of the slanted propaganda the council puts out.

“The council is hyping the image of a beautiful new leisure centre because it needs to get rid of the current Britannia Leisure Centre to clear the site for the luxury housing.” 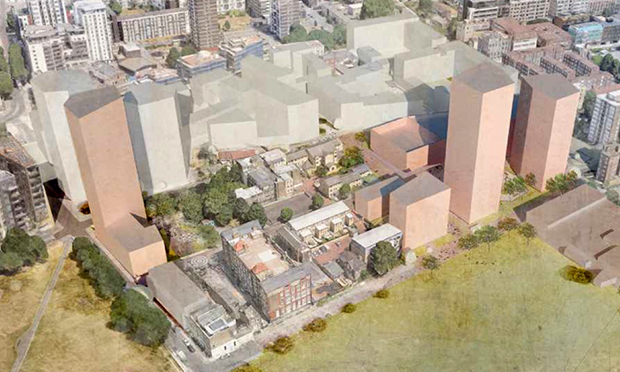 An architect’s impression of the proposal. Image: Hackney Council

The council estimates construction for the entire scheme will cost £90m, including £40m for the new leisure centre, but hopes to claw back some of that outlay through the sale of the private flats.

Campaigners disagree with the Town Hall over the need for a new school, and say a refurbishment of the existing leisure centre would be more cost-effective.

But Glanville said: “This is a really important scheme to deliver much-needed facilities in Shoreditch, an area of Hackney I lived in and represented as a councillor for over 8 years, and it’s important that I hear first-hand the feedback of campaigners and local residents.

“We need to build a new school, and residents deserve a better leisure centre fit for the 21st century. Due to government cuts we’re having to think creatively and find new ways to fund these vital services.

“The Council has done a huge amount of engagement and worked hard to share ideas and gather feedback from the local community.

“I welcomed the opportunity to speak to campaigners face to face, listen to their concerns, correct some of the misperceptions and answer their questions in person.” 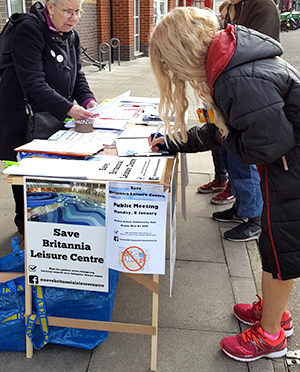 But Turnbull said: “The Mayor’s statements about how much he cares about Hoxton are just that, statements. Deeds, not words.

“Plonking 400 luxury dwellings on the verge of Shoreditch Park, including three towers up to 30 storeys high, as the Mayor himself said at our public meeting, is not considering the wishes of the people who live round about.

“Already the two towers of the Anthology luxury development, sixteen and twenty storeys high, are blighting the neighbourhood.”

She added: “The people of Hoxton don’t want more penthouses. This was abundantly clear from what people said at the meeting.

“They don’t want property prices to be driven up by developments like this one, so that their families can no longer live there, and small businesses that served the local people for decades are driven out.”

One SBLC campaigner, Michael Jones, recently told the Citizen he would be “forced to move” if the leisure centre development goes ahead, and said “noise and pollution from constant construction work” has left him in poor health.

Turnbull added: “The consultation workshops the council held last July, which only 35 people attended, were carefully stage-managed to put the most positive picture possible and seriously underplay the negative elements of the proposal.

“It is still worth remembering that the whole development is being carried forward by the Britannia Development Board, an unelected body with no minutes.”

But Mayor Glanville said: “We have engaged with residents, sports groups, leisure centre users and the Save Britannia Leisure Centre campaign extensively, including through community workshops, drop in sessions and meetings.

“The campaign group leads have been present at and contributed to all of these events throughout this process.

“All of our community engagement work has fed into the ongoing design process and we will continue to take residents’ views on board, including the feedback from the meeting last Monday.

“Residents and users of Britannia have shaped this project from the start and will continue to do so. I only wish some of the campaigners would acknowledge that in their own communications.”