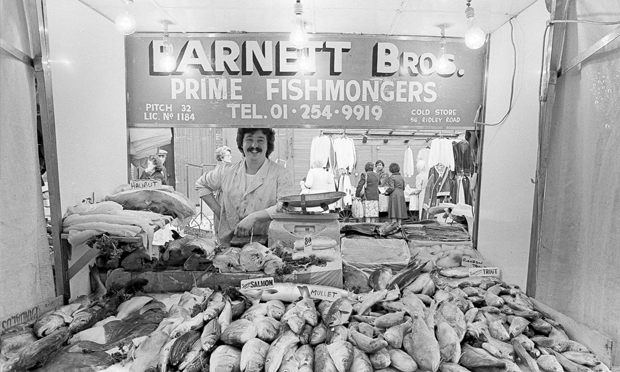 Fishy: Neil Martinson’s Another Time Another Place: Hackney in the 70s & 80s exhibition at Stour Space includes this shot of a Ridley Road Market trader. Photograph courtesy of the artist

Stour Space, the multifaceted Hackney Wick arts venue that normally showcases the work of younger, upcoming artists (currently being hounded out of the area) is taking a rare look back into the past with this new photography exhibition. It’s a collection of over 60 images by Neil Martinson, a contemporary of the celebrated Jo Spence (working together in 1974, they lit the touchpaper that resulted in incendiary feminist agitprop pioneers Hackney Flashers). On this evidence, they have that similar instinct, to find soul and anger and the spirit of Hackney in the slum-cleared, industrialised landscapes that visually defined the area until a couple of decades ago.

It will be interesting viewing Martinson’s work in a 2018 context where his own artistic life has passed into becoming its own rock-solid part of Hackney’s history and identity – his work was used heavily by Centerprise and in the many battles fought by unions and local campaigners in the 70s and 80s. The show is free, open from 9 to 5, and soon selections from it will be published as a photobook by Café Royal Books.

From 2 February until 22 February

Sia wants to swing from them, Del Boy failed to catch one, and a falling one at Raymond Blanc’s Buckinghamshire brasserie last year injured 10. Yes it’s chandeliers – seven in fact, all hanging at the Victoria Miro Gallery this February. They’re the work of Cuban-American artist Jorge Pardo, and to tell the truth, the MacArthur Fellowship recipient is more interested in manipulating light, shadowplay, and the natural forms of his jungly current hometown of Mérida in his chandeliers, rather than cramming on another gaudy diamante string.

The shifting ambient light of the space, and of the season, is a blessing in this case – as a Miro spokesperson put it: “the gallery itself – its walls, floors and ceilings – becomes part of an overall composition”. In a seperate part of the exhibition, a different kind of playfulness with light and space emerges – Pardo has also made laser-cut standing wooden frames that use shapes to partially obscure images of landscapes, like a holiday snap that’s gone all funny in the darkroom.

From 2 February until 24 March 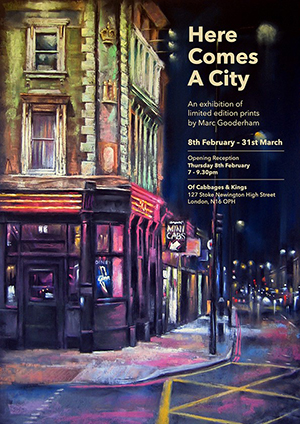 Marc Gooderham’s excellent painting of Hackney Cycles, the well-loved shop on Hackney Road, graced the front cover of last November’s Citizen. Gooderham has a knack for choosing places like this in Hackney and East London, familiar spots, and making you feel they’re iconic. His depiction of Dalston Junction (shown on this new show’s poster) has an Edward Hopper-esque way with light, his Wilton’s Music Hall is sketched with the vibrancy of something that could have sprung up in early Hollywood.

As seen in Hackney Cycles, he’s also a talented painter of urban scenes where graffiti totally dominates the street-level, creating a recursive effect where this transient artform is faithfully frozen in time. He’ll be exhibiting limited edition prints taken from his Hackney and Spitalfields series at the Lewis Carroll-quoting Of Cabbages & Kings print gallery and shop in Stoke Newington.

From 8 February to 31 March

Mark Dion has found a lot of stuff on the floor. Some of it, perhaps, in the pursuit of one of his large, outdoor public art installations (from the laboratory he produced for Florida’s National Tropical Botanical Garden to an artificial cave on a prime tourist route in rural Norway), some from rainforests, some ornate treasures buried in the banks of the Thames.

This bric-a-brac, with Dion’s theatrical presentation and the addition of models and drawings, will transform three of the Whitechapel’s galleries into alternately whimsical and compelling imaginative spaces. Those who’ve visited some of the more out-there local museums in this country will appreciate the surreal effect summoned up by Dion’s cabinets of curiosity. A series of talks on witchcraft, alchemy, taxidermy and more will be held alongside the exhibition, as well as a visit from Mark Dion himself on 15 February – check the Whitechapel gallery website for more details. 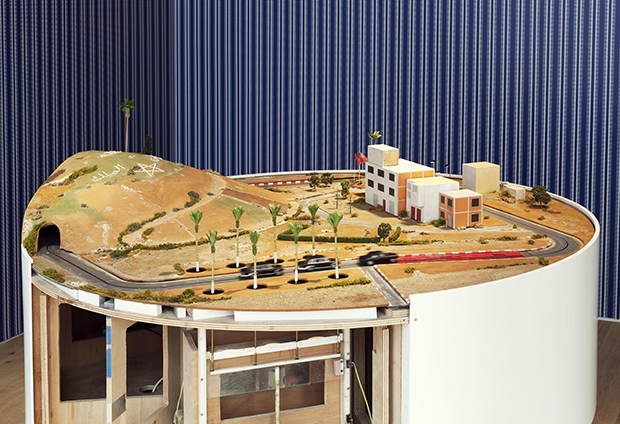 Agadir is both a coastal Moroccan city and a book by Moroccan writer Mohammed Khaïr-Eddine – the latter a rebellious and free work that oscillates between novel and play. Yto Barrada took inspiration along with the title for this commision (part of the Barbican’s The Art of Change season) – in particular from a clamorous scene where a king, a psychic, a cook, a trade unionist, a parrot, a female warrior and others debate the future of their earthquake-levelled society. (Between 12,000 and 15,000 people were killed in the 1960 disaster, from the busy port to the rammed earth structures in Old Talborjt, a once-lively plaza that had to be razed after the earthquake and has since become overgrown.)

Through an accompanying film, mural and other sculptures, Barrada documents the old Agadir and the twentieth-century rebuild in both abstract and more direct ways, to provide an overarching study of upheaval. This is her first solo exhibition in the UK, and she spoke warmly of the prospect: “The Barbican Curve is as scary as a haunted house: some pretty great ghosts have already installed wonderful projects using the space in every possible way. And now for my sins, it’s my turn. I’m honoured to have a chance to try.”

From 7 February until 20 May