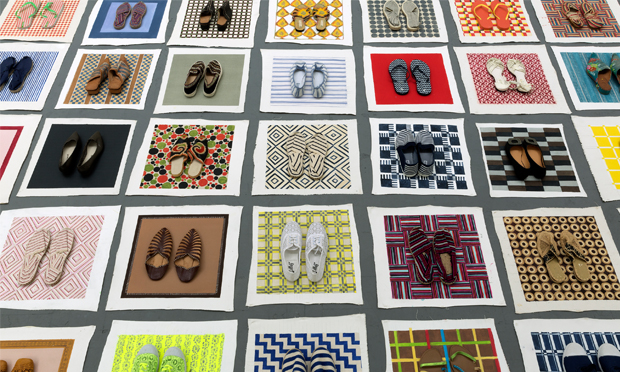 Mark Hix may be a chef and restaurateur first and foremost, but the two massive Damien Hirst pieces in his meaty eatery (meatery?) Tramshed testify to his love of art, which is explored fully in the Shoreditch restaurant’s basement HIX ART gallery. Similarly, Shoreditch native William Orbit is best known in another field – as a music producer, he has buffed work by artists like Madonna (he co-wrote her Ray of Light album), Blur and Pink! with his electronic sheen. His work as a painter has been refreshed by a recent ‘vision quest’ in the Californian section of the Mojave Desert, lending further surreality to his already dreamy canvases full of radiating colour. The exhibition is backed-up with new music from the man himself. Until 21 January

You’d be forgiven for mistaking Lisa Milroy’s latest solo exhibition, collated from fifteen years of work, for a fashion showcase at first glance. Dresses, shoes, fabrics and half sewn clothes-in-progress all feature, either as painted objects or as oil-on-canvas motifs. But clothes in this context act more as a springboard for ideas of flowing movement and stillness – enhanced through viewer interaction, which is encouraged for selected works, and a series of 15-20 minute performances based around installation painting Party of One (2013). These will see Amelia Barratt and Minyoung Choi, clad in the work’s wearable dress, swooping and weaving in and around the piece before leaving and returning it to stillness, in a distillation of Milroy’s themes. (Performances only take place on a handful of dates, so check the Parasol unit website for more details.) From 16 January until 18 March 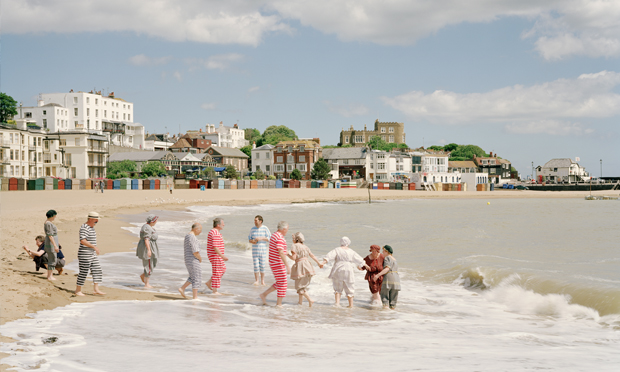 Arguably, our island has never felt smaller, less united or more tense. While Simon Roberts’ photography usually depicts mass gatherings and typically British moments of togetherness (from Shoreham Air Show to Parliament Square protests to Eid al-Fitr celebrations), his images are thematically miles away from, say, a gaudy snap on a ‘We Heart Britain’ calendar. “Roberts’ work presents the viewer with complex relationships between people and places and incongruous juxtapositions of history and contemporary culture that create gentle ironies and underlying tensions across the images,” extolled David Chandler, Professor of Photography at University of Plymouth. “It is these tensions that ultimately deny any consistency of mood and resist the coherent, and possibly seductive sense of binding national characteristics.” In this spirit, it is perhaps unsurprising that his image of Grenfell Tower, in the week following the fire, focuses as much on the surrounding community as the horrifying backdrop. From 19 January until 10 March 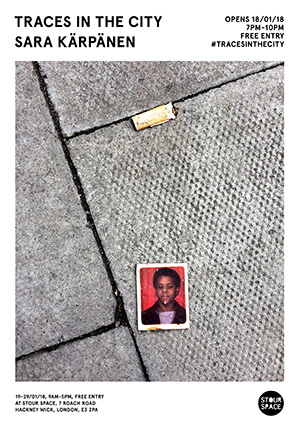 Sara Kärpänen is a Finnish-born writer (mostly poetry and pieces for ‘guide to the mindful life’, Elephant Journal), curator and artist, now based in East London. Her first two roles call for a keen eye on the city, and her latest exhibition at Hackney Wick’s Stour Space applies that skill to her artistic practice as well. Adept with paint and pencil and a creator of imaginative maps, this is her first exhibition fully comprising photography. And you can’t fault the title for accuracy – from empty condom wrappers and drug baggies to lost toys and weathered passport photos, her images from Dalston and Hackney’s pavements summon up myriad narratives in the mind of the viewer. These are interspersed with some of Kärpänen’s typed poems, which offer pleas for the human connection that she searches for in the litter and detritus of the streets. From 19 January to 29 January, opening evening 18 January

Many of us cash-strapped millennials are familiar with returning to the family home for slightly longer than the traditional flying visit. For Lydia Ourahmane, that home is in Oran, Algeria, and the recent time she spent living and working there helped summon up this new sound and sculptural installation for the Chisenhale. The exhibition will be constructed around a large-scale sculpture of metal and stone, sent shivering by bass-driven noise composed by Ourahmane. This piece will of course have a physical effect – on viewers, on other artworks in the collection, and on the central work itself, which is designed to disintegrate over the course of the exhibition. Through this process, questions of empathy and transformation in the face of trauma are raised. This isn’t the first collective experience that Ourahmane has orchestrated – 2015’s Too Late For Ambition saw her construct a neon sign, spelling out the titular statement, and she then gathered a crowd to stone it to destruction in a public square a short distance from her Algerian hometown. From 26 January until 25 March