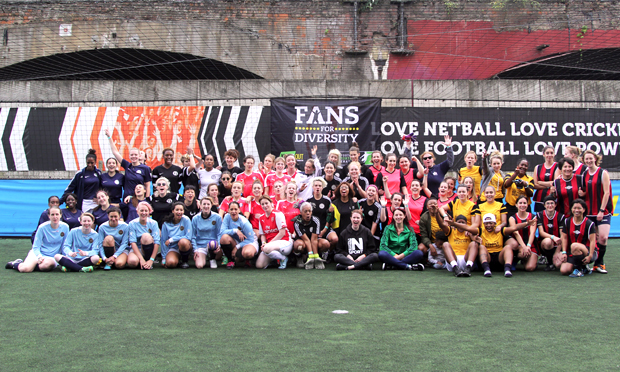 Squad up: the 2016 line-up of teams contesting Paying For Kicks. Photograph: Romance FC

Hackney and Tottenham-based football team and creative collective Romance FC have had a busy year: not only following the Lionesses to ultimate disappointment in the Women’s Euros, but also hosting a string of panel discussions, DJ sets and beginner-friendly practice sessions – all to, as they explain, “support and promote the many faces of the women’s grassroots game.”

Their latest initiative is Playing For Kicks 2017, a twelve team charity five-a-side tournament coming to Powerleague Shoreditch this Saturday 23 September.

The tournament brings together women’s teams from London, Essex and Paris, in friendly competition with a rotating selection of Romance FC’s 30+ team members, helmed by player-manager Trisha Lewis.

Those teams include Romance’s Parisien “sister team”, Cacahuètes Sluts (Instagram) who are coming over especially for the tournament.

Romance defender Aneesha Dewshi told the Citizen: “Playing For Kicks is an important tournament for us, we have created a space we’d like to see more of.

Playing For Kicks was preceded yesterday, 20 September, by A Little Less Conversation, a panel discussion featuring Lewis alongside representatives of basketball team Hackney Gazelles and the Deep Throat Choir which “explored the connection between positive mental health and being amongst sports teams, creative collectives and their surroundings.”

Earlier this month the team also ran First Love, a free training session for absolute beginners at Hackney Downs Park, and screened every Lioness’ game in the Euros at Hackney bar and taqueria Bad Sports.

Last year’s tournament was chronicled in a video, viewable below:

Romance FC kicked off for the first time in London Fields in 2012, when they were known as Boiler Room Ladies FC. They self-describe as “body positive, age-positive, pro-feminism, LGBTQ and community and [not] into unpaid labour, racism, transphobia, fascism and all the rest.”

For this tournament Romance FC are proud to partner with Fans for Diversity, run in partnership between Kick It Out and the Football Supporters’ Federation, Creative Mentor Network and Adidas Football