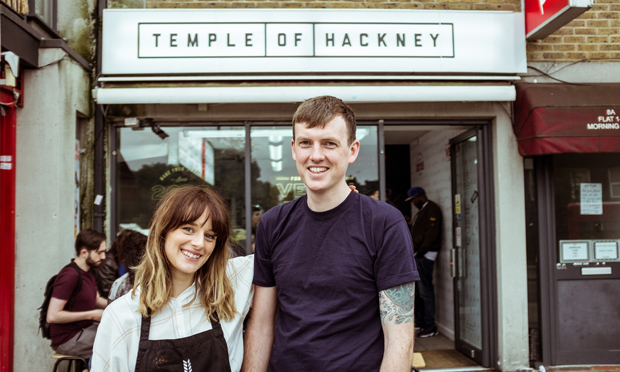 The popularity of Temple of Hackney, the UK’s first vegan “fried chicken” shop, made national news when it began trading in January – then called Temple of Seitan after the wheat gluten product it uses as a meat replacement. “Photos of its opening showed long queues outside the restaurant,” this paper reported. There are still queues outside the shop for its spicy “chicken” burgers and hot “wings”, even on weekday lunchtimes. In fact, the business recently had its busiest week ever.

Vegan food is big in Hackney. Vegan supper clubs sell out quickly. There’s a good chance of finding dairy-free ice cream or cheddar in a grocery shop. The borough has two vegan street food markets, both in Dalston, and a third will start running in Stoke Newington this month.

This lively vegan scene is being fuelled in part by the open-mindedness of Hackney’s diners. “People will go out for, say, a Chinese, Italian or Ethiopian meal in Hackney, and now non-vegans are seeing vegan food as just another option,” says Sean O’Callaghan, who runs the popular Fat Gay Vegan blog and organises vegan events, including a food market and beer festival in the borough. “That’s the secret of success for a vegan food business in Hackney – you’ve got to have a product that everybody wants, not just vegans.” 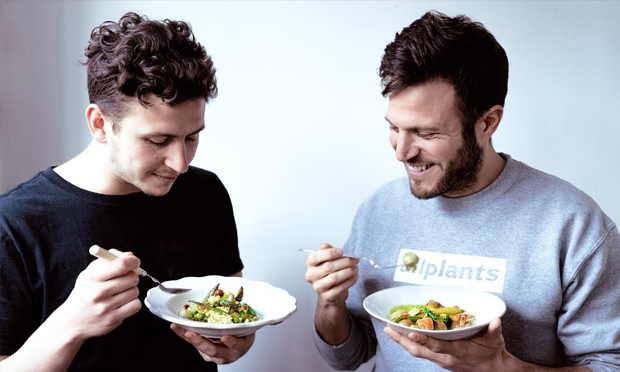 As a result, standards in terms of taste, presentation and creativity are high. Those looking for vegan food in Hackney can sample “fish” and chips, chilli “cheese” nachos, coconut milk-based “Magnums”, and cocktail-inspired alcoholic ice lollies. Vegan businesses trading in the borough are providing “some of the best food in the UK”, thinks O’Callaghan.

Rather than suffering from the strong competition, vegan businesses are seeing their customer base increase as satisfied diners seek out other vegan options. Vegans and the vegan-curious from elsewhere are also being lured in. “Hackney is becoming a bit of a vegan destination,” says Temple of Hackney co-founder Pat O’Shea.

Vegan food in Hackney is about more than just foodie fashions, however. Vegan food also appeals to some of Hackney’s religious communities. Temple of Hackney says its mock chicken menu is popular with various religious groups prohibited from eating meat all or part of the time, and especially with Muslims, who make up around 14 per cent of Hackney’s population. 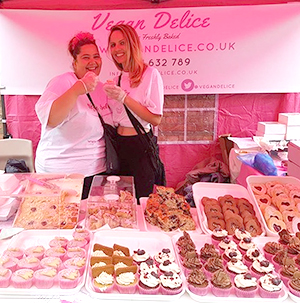 Chanel Delice, founder of bakery business Vegan Delice that serves dairy-free cupcakes, biscuits, breads and hot doughnuts, first sold her products at a car boot sale at Shacklewell Lane mosque, and hopes to return there in the future. “It’s great that vegan products can cross over to Muslims’ dietary needs due to no animal products being used,” she says.

The strong presence of vegan businesses in Hackney is also due to the borough’s history of association with social and ethical issues, which has provided them with a steady stream of customers. The borough has fostered socially engaged vegan businesses for many years – there has been one on the site now occupied by Clapton vegan co-operative Black Cat Café for well over a decade.

This tradition continues. “What you’ll find overall in Hackney is that people who run vegan businesses care about more than animals,” says O’Callaghan of Fat Gay Vegan. “They care about the broader picture, about making Hackney a vibrant, welcoming and inclusive area to live in.”

This can mean reducing environmental impact, paying living wages, or providing community meeting spaces alongside serving vegan food. The monthly vegan food market O’Callaghan organises has an “inclusive stallholder policy”, meaning it reserves three-quarters of its stalls for “traders who identify as BME, LGBTQ, people with disabilities, and/or as women”.

Operating ethically is also a priority for AllPlants, a vegan ready meal delivery service that launched in Stoke Newington earlier this year. It aims to supply healthy plant-based dishes, currently including a cashew “mac ‘n’ cheese” and a black bean chilli, that are as affordable as possible. The business aspires to be zero waste and is also in the process of becoming a public benefit corporation.

Initiatives of this kind are admirable, but can cost a business significant money and time. AllPlants co-founder Jonathan Petrides admits that running an ethical vegan business is “definitely harder” than running a standard food business. But, he says, “it should be – everyone should have to think about things in this way”.

While Allplants and others have managed to get up and running successfully, some vegan food businesses find being in Hackney simply costs too much. “It’s very expensive to set up a business here now, which is why people are moving elsewhere – like Tottenham, Leyton, or Leytonstone”, says Meriel Armitage, co-founder of Club Mexicana, which serves up a wholly vegan menu including Baja “to-fish”, jackfruit tinga tacos, and horchata ice cream. 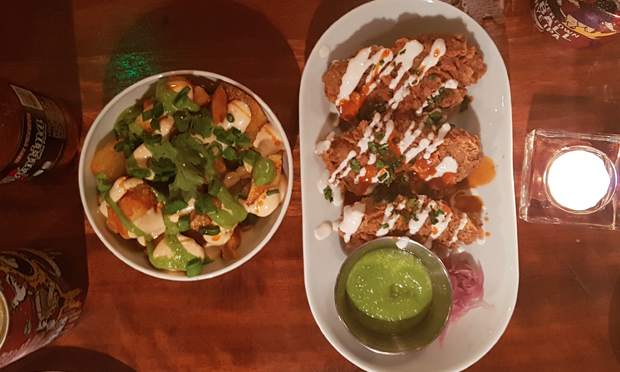 The ‘chicken’ wings and cubed aubergine at Club Mexicana.

Currently in residence temporarily at Kingsland Road bar Pamela, Armitage and her colleagues hope to find a permanent site for Club Mexicana in Hackney. It’s “the number 1 place that we’d like to be, but rents keep on going up and up”, she says. However, for now, Club Mexicana and other vegan businesses are thriving in the borough. “It’s still a place where people can experiment, and that’s always going to be the case,” says Armitage. “Hackney is a good home for us.”