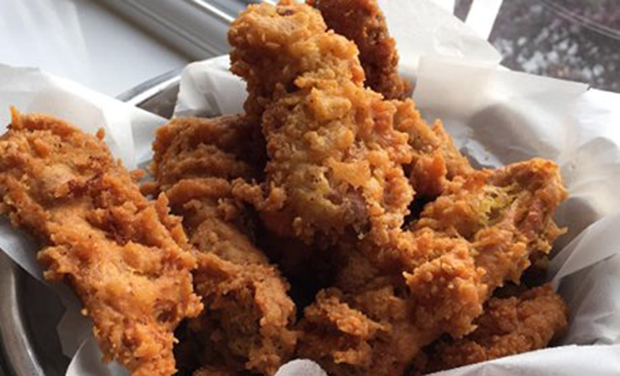 “Chicken” in a basket. Photograph: Temple of Seitan

A fully vegan eatery called Temple of Hackney has opened up – right next door to the Hackney Meat Centre, a halal butchers.

The fast food joint, run by something called Temple of Seitan, serves fried “chicken” made of seitan, a meat substitute that is already popular in some hipster parts of America. Vegan burgers are also available, as are gluten free options. All its food is 100 per cent vegan.

It opened its doors over the weekend, presumably to capitalise on the Veganuary craze. Photos of its opening showed long queues outside the restaurant, which has already garnered rave reviews from some diners who sampled its dishes.

Lauren Watts wrote on Facebook that it served “the best vegan food I’ve ever eaten”, while Matt Lippard praised its “genuinely tasty food”.

Another customer, Deividas Astraukas, wrote: “I really like the idea of vegan chicken as it raises awareness and helps stop meat consumption.”

However, he described the food as “very salty” and said the portions were too small “considering the price”.

He added: “Don’t get me wrong, it’s just my personal opinion, but I could of [sic] went to a restaurant and had a nice meal for the same price considering that this is ‘fast food’.

“A bit disappointed, but upmost [sic] respect for trying and make a change.”

Vegan chicken and chips with coleslaw costs around £8 according to a reviewer for the Londonist website, and drinks cost £1.50. The eatery is located in Morning Lane, Hackney Central.