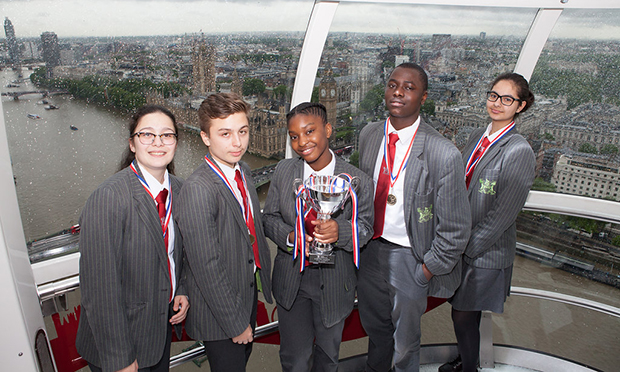 On top of the world: the team enjoys a trip on the London Eye. Photograph: Mosaic

A team of young entrepreneurs are celebrating after taking the crown in last week’s grand final of the 2017 Enterprise Challenge.

The contest asks students from some of the most deprived areas in the UK to develop feasible business ideas, with a little help from experienced mentors.

Pupils from Skinners’ Academy in Woodberry Downs impressed a judging panel made up of industry experts with their idea for a video-sharing platform called YouTe@ch, which engages students in exam preparation, skills-building and career development.

Team YouTea@ch is made up of teenagers Salise Buldu, Sezen Gungor, Yaw Opoku, Ionut Tiplea and Briana Williams. Speaking after their victory, they said: “We did it for our team, for our school, for our families, for London!

“We’ve also learnt a lot about teamwork, resilience and determination. Having the support of our great mentors and teachers was key.

“We’ve learnt so much and we’re all just so proud of each other. Our mentors always say how we are the future and we now believe that we are!”

Their pitch saw them emerge victorious ahead of five other schools from across the country in the competition run by mentoring charity Mosaic, which is part of the Prince’s Trust.

The team of budding business wizzes will now have the chance to make YouTe@ch a reality, thanks to the £500 seed fund they received for winning. Skinners’ Academy, which has now won the esteemed award twice, will take home £2,500.

Following their triumph, the Hackney teenagers enjoyed luxury rides in a Rolls Royce car, an exclusive lunch at Twitter’s London headquarters, and a private spin on the London Eye.

They were later joined by the other competitors – from Gordon’s School in Surrey, Holyrood Secondary School in Glasgow, Ladybridge High School in Bolton, Dixons Academy in Bradford and Hodge Hill College in Birmingham – for afternoon tea at Harrods.

The grand final, which took place last Thursday in the offices of a central London law firm, featured a speech by chef and musician Levi Roots, whose infamous appearance on BBC2’s Dragons’ Den led to him creating a multi-million pound food business.

Commenting on the event, Roots said: “It was such an inspiring day, hearing the kids and watching them pitch reminded me of myself when I was on Dragons’ Den.

“I think that they were wonderful. They are all winners but I do think Skinners’ Academy had the overall business acumen and that’s what helped them take the crown. It’s really good to give a good pitch but the business behind it has to stand out.”