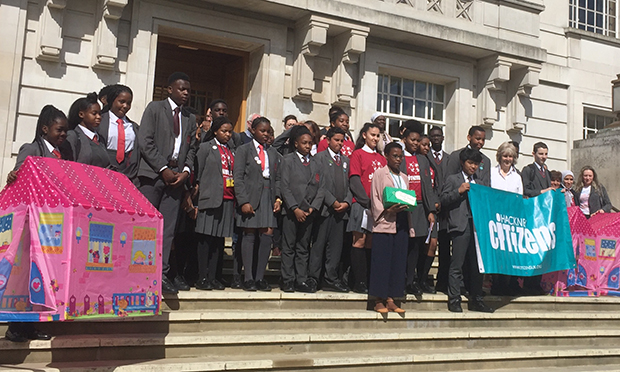 Over fifty students urged the council to do more to tackle Hackney’s rogue landlords in a colourful demonstration outside the Town Hall last week.

The pupils from Cardinal Pole school and East London Advanced Technical Training (ELATT) are members of the local branch of CitizensUK, the largest civil society alliance in the country.

The delegation delivered a petition, signed by over 500 Hackney residents, calling for the council to introduce a licensing scheme for landlords in the borough.

Such a scheme would require landlords to apply for a licence for every property they manage. CitizensUK says it would give the council more powers to pinpoint and tackle unscrupulous conduct.

A spokesperson for the campaign said: “There are lots of landlords who treat people around the borough poorly, such as not doing repairs and evicting people with no notice.

“Hackney has no landlord licensing scheme, and we want the council to introduce one so bad landlords cannot get away with it anymore.”

Newham Council, which launched a licensing system in 2013, told CitizensUK that the scheme has helped in finding and prosecuting criminal landlords.

Reverend Andy Pakula, minister of New Unity at Newington Green and a CitizensUK member, said: “Hackney Council should seriously consider equipping itself with additional powers to deal with those rogue landlords who make life so miserable for many people in the borough.

“The licence fees should cover the cost of inspection and enforcement. There should be no cost to taxpayers.”

A council spokesman confirmed it had received the petition and added that new proposals on renting will be published in the coming months.

Town Hall housing supremo Kim Wright said: “The council regularly investigates and prosecutes rogue landlords who do not meet the standards expected of them, as well as providing training to good landlords to help them provide a better service to their tenants.

“We are currently reviewing our enforcement approach to explore whether a discretionary landlord licensing scheme would help improve the conditions of privately rented housing in Hackney.

“Any private tenant who has a problem with the conditions of their home and feels their landlord isn’t taking action should contact us so we can offer advice, support, and – wherever necessary – action.”

← Get checked: Prostate Cancer Roadshow for African and Caribbean men to arrive in Dalston on MondayHackney students triumph in prestigious business contest →