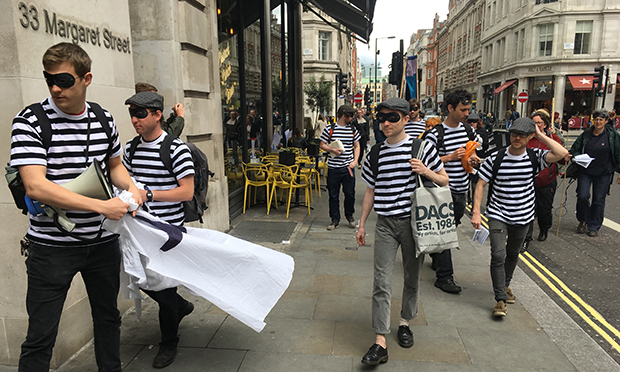 The Hackney-based activists, dressed as burglars to highlight the “daylight robbery” suffered by tenants, formed a wall outside Savills on Margaret Street as the high-end agency’s bemused staff were left stranded outside.

Digs organiser Danny Hayward said: “Letting agents are incredibly well organised and well funded, and right now they’re using this funding and power to derail the ban on extortionate fees. Everyone who rents knows this ban is long overdue.

“Greedy letting agents hold the keys to our homes, and in a captive market like London, with such a shortage of affordable homes, letting agents can and do charge whatever they like.” 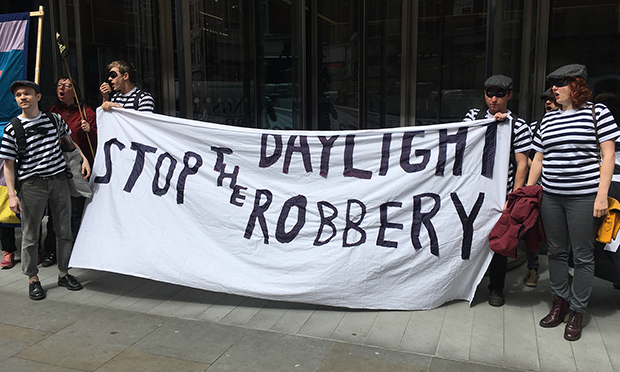 Savills asks tenants for around £600 when they move into a property, according to figures from rights group Generation Rent. The cost includes reference checks and a mysterious “set up fee”.

Chancellor Philip Hammond proposed a ban on letting fees in his Autumn Statement, but twenty high-profile agents recently signed a letter urging the government to scrap the ongoing consultation on the ban.

Hayward added: “Letting agents need to know how strongly we feel about this. That’s why we’re taking action. If they want to carry on trying to derail this ban, they’ll have a fight on their hands. They should do the decent thing and drop their opposition to the fees ban.

“The government must stick to its guns. Right now it needs to show that it puts the needs of the UK’s nine million renters above the commercial interests of letting agents.” 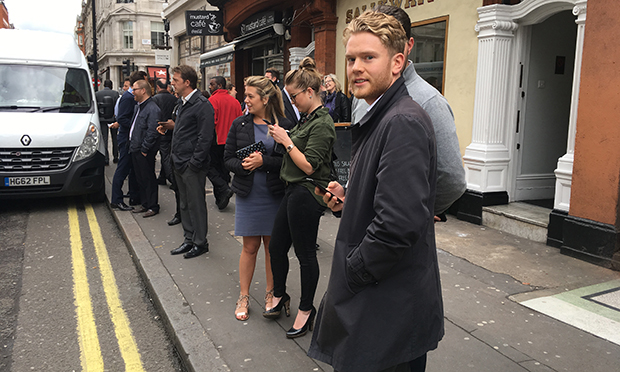 Savills workers watching the demonstrators from across the road were reluctant to give their thoughts on the fees, with one joking that he would be fired for saying anything to the press.

Another, who did not wish to be named, was more vocal. After asking one member of Digs whether she had a job, and sarcastically asking others if they were students, he told the Citizen: “This is just an attack on the middle class. I understand their sentiment but is this the best way to go about it?”

As chants of ‘Shame on you’ were directed at the man and his colleagues, he added: “This is incredibly antagonistic and aggressive. One of these protestors has a PhD – she should know better.” 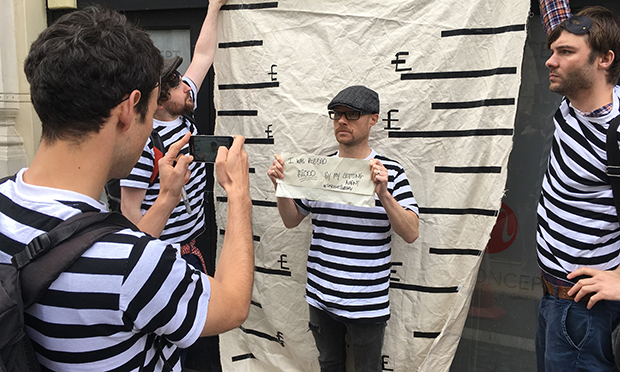 Digs activists, who also posed for “mug shots”, spoke to over 40 tenants in Hackney ahead of the demonstration. The group says not a single person thought letting agents’ fees were justified by the service they received.

A Savills spokesperson said: “Savills can confirm that a number of individuals gathered outside its offices on Friday 19 May, seemingly to protest about letting agency fees.

“Savills was not contacted prior to the event. Security and police were on site and able to deal with the matter.”