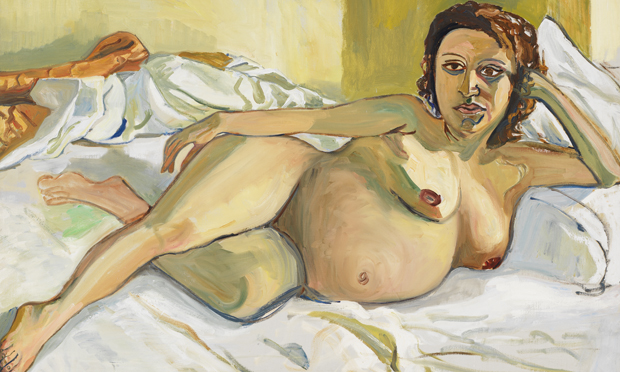 This latest exhibition of Alice Neel’s acute and incisive portraits at the Victoria Miro gallery feels entirely current. Neel’s attitude to addressing race in her work was progressive – arguably even by today’s standards. Rather than focus on one ethnic group, her work eloquently conveys her feelings towards the importance of community and true diversity. Seeing such a bold and cogent selection of her paintings in one place loudly voices her adoration for the rich cultural tapestry she inhabited, both in East Harlem and later in Manhattan’s Upper West Side.

It feels as contemporary and exciting as the works must have been at their first viewing. It is a real pleasure to see such a well-presented, considered selection of Neel’s work. The paintings on show include some of her strongest pieces and allow people to see the very best of her unflinching and personal approach to portraiture. 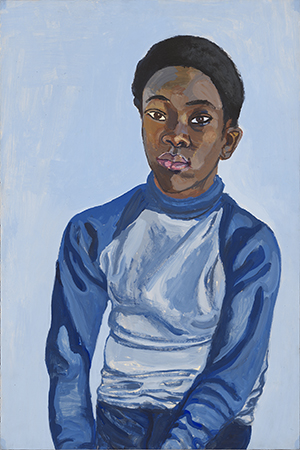 Her approach to representing race was, and remains, refreshingly unpatronising. She was an active supporter of the civil rights movement and an affiliate of the Black Emergency Cultural Coalition, but her work remains personal and does not feel entirely political. Within the context of her paintings her sitters are there only as a representative of her circle of friends or one of her neighbours and most importantly as individual characters – not as a delegate of their race.

What is perhaps most notable about Neel’s work is her astounding ability to accurately distill the very essence of her sitter while simultaneously maintaining the intelligent nuance that characterises her paintings. In one of the paintings feature in the show, Pregnant Maria (1964), Neel manages to sufficiently insinuate a smirk on the face of the visibly pregnant Columbia University student she was painting. The young woman oozes nonchalant confidence and pride and yet the painting remains subtle and dignified.

Neel’s ability to relay a subject’s character is demonstrated in a completely different way in her painting Benjamin (1976), the portrait of a young boy who was the son of the superintendent of Neel’s apartment block. She successfully paints his shuffling awkwardness and faint discomfort at being looked at for so long, a recognisable trait in children asked to remain still for long enough to be painted. Most of her subjects, however, are shown as open and at ease and, particularly in some of the male portraits, there is more than a hint of flirtation. 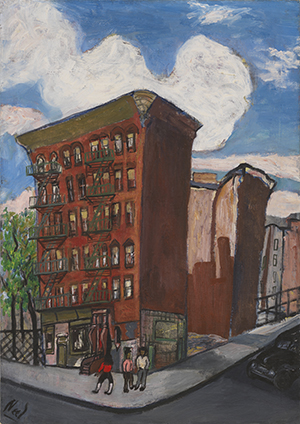 Building in Harlem by Alice Neel

In order to further explore Neel’s emotional dedication to the importance of community that was so integral to her work, the exhibition includes a series of historic books and photographs. These provide additional illustration of her dedication to her beliefs and friends, family and neighbours who she used as her models.

The only non-portrait in the exhibition is Building in Harlem (1945) which seems to consolidate the concept of the show and of a lot of her work. It shows a street corner in Harlem on a sunny day painted with a cartoon optimism that perfectly showcases Neel’s love for her city and the diverse people that make it.