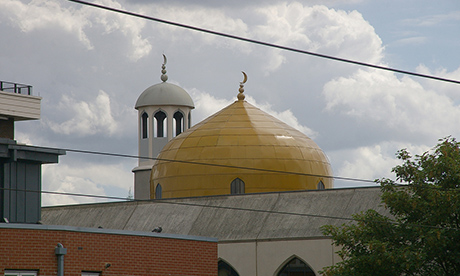 Finsbury Park Mosque: Izzadeen is believed to have attended speeches by Abu Hamza at the Islington mosque. Photograph: Matt Buck

A a solicitor for Abu Izzadeen, a Hackney-born Islamic extremist who was named by Channel 4 News as the man behind an attack in Westminster which left three others dead, has denied the claims, saying his client is still in prison.

Channel 4 journalist Assem Baig later tweeted to confirm the news after speaking to Izzadeen’s brother, and the network has now admitted it is not sure who was responsible.

Abu Izadeen’s brother has told me that the Westminster attacker is not his brother, he says he’s brother is still in jail

Four people, including a police officer and the suspect, are so far confirmed to have died in today’s incident.

Witnesses have described how the attacker mowed down pedestrians on Westminster Bridge before crashing his car into a gate outside the Houses of Parliament. He is then said to have stabbed and killed the officer before being shot by armed police.

Now on #C4News – my report on #Westminster attacker believed to have been Trevor Brooks aka Abu Izadeen, of banned Al Muhjairoon group pic.twitter.com/T3VcKhqGSo

BBC home affairs correspondent Dominic Casciani said he had been told by “multiple sources” that Izzadeen, who is also known as Trevor Brooks, was not the attacker.

Confirmed from multiple sources – official and community – that Trevor Brooks NOT attacker. He’s still in jail despite what others report.

In November 2015 police stopped Izzadeen at the Hungarian border town Lokoshaza on a train destined for Romania, raising concerns he may have been trying to reach Syria.

Izzadeen was travelling with another known British extremist, Simon Keeler, despite the fact that both of them are subject to a travel ban preventing them from leaving the country.

In 2008, the pair were jailed for inciting terrorism abroad and terrorist fundraising.

Abu Izzadeen long known to the security services and has often been under surveillance. His propaganda videos have been viewed 1.3m times pic.twitter.com/Ykp5vOaA4F

Izzadeen was born to a Christian Jamaican family in Hackney but converted to Islam at the age of 17.

He gained notoriety in 2008 for heckling the then Home Secretary, John Reid, during the minister’s speech at a Leytonstone school.

The Muslim activist is thought to have been radicalised by Omar Bakri Mohammed and Abu Hamza at Finsbury Park mosque.

Channel 4 issued a statement saying: “On tonight’s Channel 4 News, senior home affairs correspondent Simon Israel quoted a source as saying that the name of the Westminster attacker was believed to be Abu Izzadeen, formerly known as Trevor Brooks.

“During the course of the programme, conflicting information came to light. Channel 4 News is currently looking into this.”

Mr Israel tweeted: “The source I trusted, but ultimately I made a mistake. This time I got it wrong. Abu Izzadeen is in prison.”

The source I trusted, but ultimately I made a mistake. This time I got it wrong. Abu Izzadeen is in prison.

Channel 4 News editor Ben De Pear tweeted: “Tonight our trusted Correspondent @simonisrael made a mistake in naming the wrong person as the suspect in the parliament attack.

“in years of award winning coverage @simonisrael has rarely been wrong; tonight he was. Abu Izzadeen is in prison & not the suspect”.

2/2 in years of award winning coverage @simonisrael has rarely been wrong; tonight he was. Abu Izzadeen is in prison & not the suspect

Sadiq Khan earlier posted a video in response to the horrific events at Westminster.

Londoners will never be cowed by terrorism. pic.twitter.com/LTLhgZ7OLQ