These were the scenes on Tottenham Road in Dalston this morning as anti-fascist protesters clashed with a lone counter-protester.

The protest of the controversial gallery with links to the fascist-leaning ‘alt-right’ online movement started slowly this morning at 11am, but eventually numbered an estimated 300 people, who marched down Kingsland Road before returning to the gallery for closing speeches and demonstration. Organizers vowed to return again to the gallery in the coming weeks, with a view to precipitating its eventual closure.

A police van, several officers and an inspector were present throughout, however the scenes in the above video were about as heated as the protest got. A window above the gallery entrance was broken, however this is thought to have occurred prior to today’s demo. A planned, more numerous counter-protest did not transpire, and no-one representing the gallery was seen or heard from.

Speaking to the Citizen, the counter-protester (who gave his name as D.C. Miller) explained his stance: “[LD50 hosted] people speaking who hold very right-wing ideas. I think that’s a good thing, because I think that we have to be able to have discussion with people who hold these ideas. There are millions of people in the world who have these ideas now. Trying to repress them isn’t going to make them go away. We have to be able to have space where we can talk to each other, not just scream at each other, and I think that a gallery is such a space.” 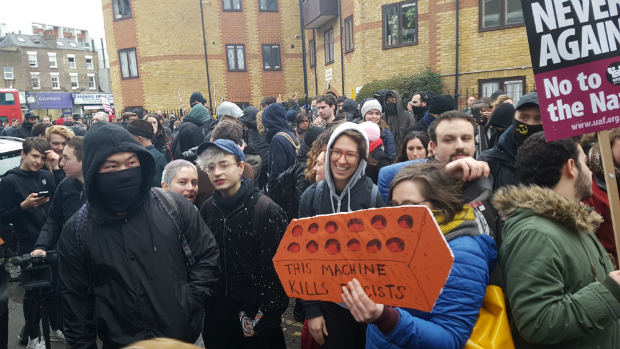 A protester, who declined to give his full name and, like many in the crowd, had his face covered, countered this viewpoint: “We don’t care about annoying liberal idiots or hard-right people that want to have free debate or whatever. We care about shutting down organizing spaces…there’s enough evidence to say that they’re organizing in this space. Any kind of fascist organizing causes a physical threat down the line.”

LD50, owned by Lucia Diego, has been heavily tied to the neo-Nazi ‘alt-right’ movement since its “Neoreaction conference” last year. Speakers at that event included Brett Stevens, who has previously praised Norwegian mass killer Anders Breivik, saying “he chose to act where many of us write, think and dream.”

Online opposition to the gallery has come mainly from the Shutdown LD50! site, put together by Andrew Osbourne. American businessman Brian Caffyn, the benefactor of LD50, this week denied any interest or involvement in its activities when he spoke to a Hackney Citizen reporter.