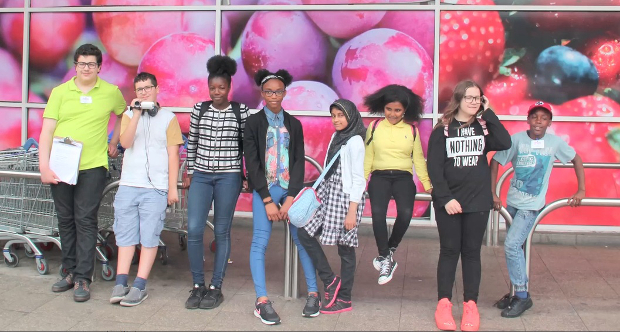 The students take a break from their filmmaking exploits

A season of festive indulgences is upon us. Advent calendars, family meals out, Christmas cake for breakfast and mince pies as a bedtime snack… it can be hard to say no when temptation is everywhere.

Not for a group of Hackney school children, however, who have made a short film entitled Where the Lies Are to tell their peers about the advertising pressures young people in the area face when making choices about food.

These student filmmakers, aged between nine and 14 and hailing from various local schools (Our Lady’s Convent High, London Fields Primary, Mossbourne Parkside Academy and Petchey Academy), have a point to make about the food advertising that targets them at home through their technology and on the streets on billboards and posters.

As the young narrator confirms: “Food advertising is all around us, just about everywhere we go, on the streets, on TV or on computers.”

And although this is probably not news to adults, the film is made primarily for other children who may as yet be unaware of how their choices are shaped, driven, and manipulated by the marketing messages they absorb every day without even noticing.

The students held the premiere of their film last month at the Hackney Picturehouse, and it will now be released online.

Nat Mady, co-founder of the local community interest group Cordwainers Grow, which pioneered the project and secured its funding from Hackney Council, hopes that the children involved will help to share it with their friends and make it a viral success.

According to Mady, “the project was about giving children the knowledge to understand how to make their own conscious, informed decisions. Having a takeaway or bar of chocolate every now and again is fine, but balance is key.”

The children who took part certainly seem to agree. After attending various workshops and talks on the topics of advertising and healthy eating, examining food packaging and recording the marketing that they saw each day on their way to school, the filmmakers have become savvier when it comes to choosing their snacks.

Ayoub, who is 15-years-old and a Year 10 student at Petchey Academy, says: “You should think twice before buying […] because you never know what’s in your food”.

Another student, Rachael, reminds us to always check the back of food packaging, “not the front, because that’s where all the lies are”.

Nevertheless, habits of a lifetime are hard to break and as one of the student contributors says in the film: “We love food that is bad for us.

This is why Cordwainers Grow know that this film is only the beginning and that more campaigns will be needed in the future if they are to have any real impact on the health of Hackney’s school children.

Indeed, as advertising now targets children in every aspect of their lives, even marketing fast food to them while they play games on their phones, it may take more than a community-based initiative to effect long-lasting change.

However, Mady is optimistic that, by arming children with greater awareness, they may grow up to make healthier choices.

And so, whilst we are unlikely to renounce all of our treats this Christmas season, perhaps Where the Lies Are will be a gentle reminder to us and our children that, although food advertising may look delicious, in so far as it targets young people, it can never be quite guilt free.