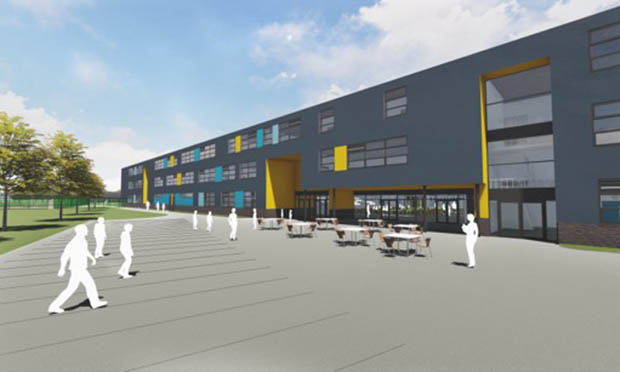 An artist’s impression showing what the Barclay Secondary Free School would look like if/when it is built. Image: Lion Education Trust

Plans for a new free school on the site of a former depot adjacent to Hackney Marshes have been dealt a blow after the government stepped in to delay its opening by at least a year.

It had been thought Barclay Secondary School, which would be run by the Lion Academy Trust on the site on Lea Bridge Road, could start taking in pupils as early as 2017.

Now this has been deferred until at least 2018 owing to “perceived planning risk” in the face of stiff opposition from Waltham Forest Council.

Whitehall’s decision comes after Christopher Stark, senior project manager for the scheme, told the Hackney Citizen a “substantial number” of Hackney-based parents had already signed up to send their children to the as yet nonexistent school.

He said the decision by the site’s owner, the Department for Education’s (DfE), was “a difficult setback”, adding: “I am really sorry to have let parents and students down like this, but the decision was not ours to make.

“We are firmly on track to resolve the issues standing between us and opening and will be making further announcements shortly.”

The site, located just over the border from Hackney next to the Middlesex Filter Beds nature reserve, is designated Metropolitan Open Land, meaning it is subject to special protections from development. It was purchased by a branch of the DfE from Thames Water for the express purpose of bringing a new free school into being.

Councillor Grace Williams, Waltham Forest Council’s cabinet member for children and young people, has previously questioned whether the Lion Academy Trust was the right provider and has said the proposed school would be situated “in the wrong place”.

She told local independent newspaper the Waltham Forest Echo earlier this year: “Building a secondary school on the edge of the borough could create problems.

“It is not close to the areas where the people who need the school places live. We are concerned it could attract pupils from existing schools so their numbers reduce and their finances suffer.

“If the new school does go ahead, it’s possible that many of its students will come from Hackney.”

Barclay Secondary Free School would initially be based in temporary premises on the Lea Bridge Road site – which it would share with a primary free school called Athena.

To begin with, the secondary school would offer places for 208 pupils in Year 7, but once fully occupied in 2023, it would provide education to 1,400 pupils.

A spokesman for the DfE said: “After careful consideration an early decision has been taken to defer the opening of Barclay Secondary Free School from the current proposed opening date of September 2017.

“We remain committed to opening the school and will continue to work closely with the trust and local authority to ensure that the school opens successfully to cater to the demand for school places in the area.”