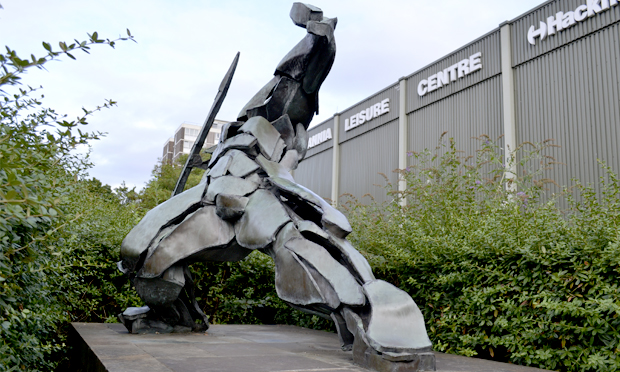 Britannia, rebuilt, would still rule the waves thanks to new swimming lanes alongside a lagoon-style pool, flume and other amenities, the council is pledging.

A fresh incarnation of the Britannia Leisure Centre could open its doors as early as 2020 if politicians take the plunge and forge ahead with the plans.

In a tacit challenge to those campaigning to “save” the leisure centre, Mayor Philip Glanville said problems with the existing structure meant demolishing it and starting afresh was the “only option” if it is to escape total closure.

He spoke as a public consultation – long delayed because of the purdah period preceding the Hoxton West by-election – was launched.

Pledging that a version of the much loved family friendly lagoon-style pool would feature in the reconstructed Britannia, he said the new centre would occupy land in the east of Shoreditch Park which is currently home to football and basketball courts.

The council’s planning team foresees these being relocated onto the roof of the new leisure centre, while a school and residential towerblocks will be built on the footprint of the existing 1980s-era building once it is demolished. 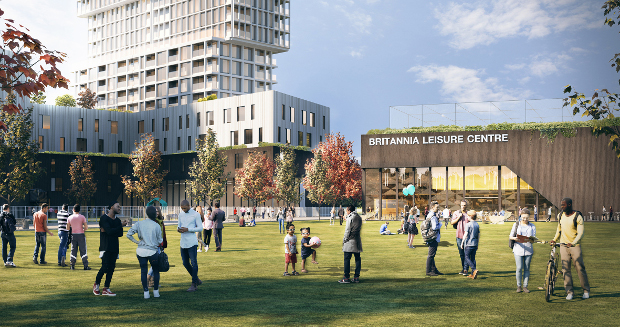 Sale of the majority of the flats at market rate will provide the bulk of funds needed for the new leisure centre and school, but the council’s “feasible options” envisage providing either 40 or 80 affordable homes also.

These could potentially be let at the “living rent”or made available via shared ownership schemes. Precise details have not yet been worked out.

Pat Turnbull, from group Save Britannia Leisure Centre, has previously told the Hackney Citizen she does not accept the argument that the centre in its current form is too old and unsuitable to be worth restoring.

She has also attacked the council for “sacrificing” a much loved facility to build flats few people in Hackney will be able to afford.

But Mayor Glanville said yesterday that it would cost £14 million to refit the building to required standards – and he added that the centre would need to be closed while this work was carried out.

“To secure a building for the next 20 to 30 years, which is what we have to do as asset management – the type of investment to make Britannia fit for purpose is £14 million plus, and closure,” he said. “The idea that you just patch a building up, that would be the betrayal of the leisure centre… You need a fundamental look at its internal design.”

He added: “There are absolutely no plans to close the leisure centre. It’s all about building a new leisure centre with better facilities than the one there at the moment.” 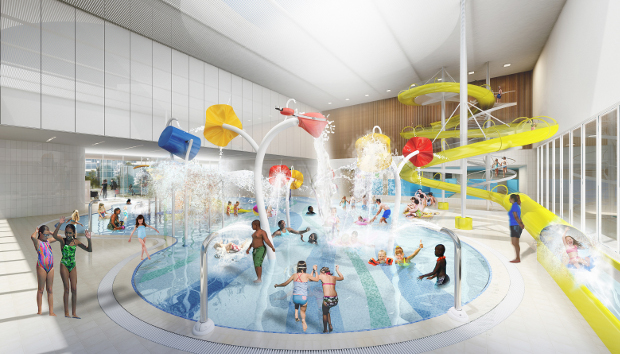 The spectre of Clissold

The Town Hall insists its plans mean leisure centre users will not have to bear onerous interruptions to their access to facilities since the new Britannia will be constructed before the old one is swept away.

There will be no loss of green space in Shoreditch Park, and improved amenities will include a new cafe and toilets. Lane swimming will also be introduced alongside existing child-friendly facilities, and there will be an improved soft play area for kids.

Though the consultation is ongoing, council officers openly admit that there is in effect no “Plan B”, however, with no alternative sites lined up for the nascent school, run by the City of London Corporation, which has already begun advertising places to parents and prospective pupils.

Perhaps mindful of the political sensitivities that surround leisure centre rebuild projects, Mayor Glanville has been careful in his choice of words.

On the housing point, he added: “The only reason there is any private housing on site is to fund a new leisure centre and a new school. The idea it’s just about private housing, I would strongly dispute.”

Those with relatively long memories will recall the debacle over the Clissold Leisure Centre, which was delivered late and massively over budget in the late 1990s, only to be beset by numerous problems for years afterwards. The council – which took a walloping over this – is determined such disasters must never be repeated.

In a sign of this nervousness, it is keeping as much control of the scheme as it can, rather than offloading it to developers and outside architects wholesale.

“One of the advantages we have as the council is we’re going to be taking this scheme – all elements – through planning ourselves, and then we’re looking for a developer partner,” said the mayor. “We’re not saying OK, site one, off you go to a developer.

“We’re making sure we do all that investment up front, and then we obviously control the quality of the development coming out the other side and also have some influence over how it’s sold and marketed, which I think is quite important for local people.”

This last point refers to the tendency for flats in prime inner-London areas to be snapped up by overseas investors – a process that can hollow out communities and lead to accusations that homes in some postcodes are being used as Monopoly pieces by money launderers.

Mayor Glanville said: “We’re got some clear policies in our estate regeneration where we discourage that [sales to overseas investors] in our sales procedures. That’s something we could look at here.”

Having a marketing presence on site and not selling flats through estate agents could help eliminate some of the risks in this area, he said.

The new secondary school, a branch of City of London Academy, will help solve the strain on school places locally, according to deputy mayor and education chief Councillor Anntoinette Bramble.

It will take in 180 students in its first year and would eventually offer 900 new school places, plus a sixth form, and  it is set to open at a temporary location on Audrey Street in September 2017.

Fittingly, given that the Britannia is the place where local election counts have traditionally been held, the project and how it pans out is shaping up to be one of the first big tests of the competency of the recently elected mayor and his chosen team.

← Well Street Market relaunches in style following crowdfunding campaignHow to Date a Feminist, Arcola, review: ‘there was proper laughter, and lots of it’ →