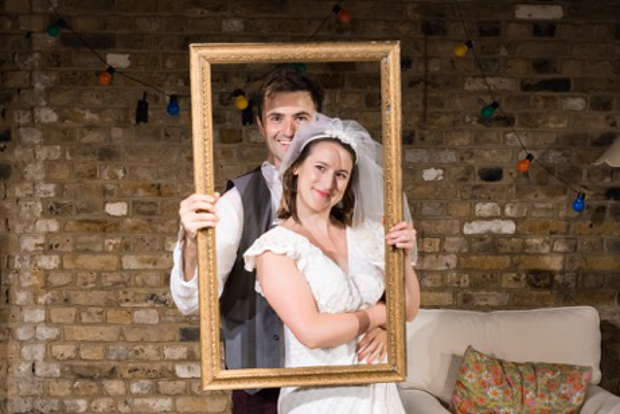 I don’t often take cultural recommendations from the bartender, but the man who poured my wine at the Arcola Theatre last night was very keen to recommend How to Date a Feminist. “It’s hilarious” he said, and so it proved. The show, back in Dalston by popular demand, is subtitled ‘a romantic comedy’ and the assembled audience in the basement theatre was ready to be amused.

On paper, you might wonder if there is anything original left to be said by this, the most over-used of genres. Man loves woman. Woman loves man. Man and woman get married, have problems, resolve problems. Tears, laughter, curtain down and everybody goes home happy. And in theory, this is the simple plot arc of How to Date a Feminist – there are two proposals, two weddings, and lots of kissing.

However, from the opening scene, it becomes clear that writer Samantha Ellis’ sharply crafted script delivers an altogether less conventional take on the rom-com. Lights go up on Steve (Tom Berish) down on one knee confessing his love to Kate (Sarah Daykin).

Lines like these come thick and fast throughout the evening and their dry delivery only adds to the humour. The rest of the audience certainly agreed. It was a modest crowd but there was proper laughter, and lots of it.

No surprise. The comedy is intelligently written and, apart from a couple of scenes between Steve and his mother that drag a little, it feels well-paced. Unbroken by an interval, it races through its 90 minutes and is really very funny throughout. The two actors (who admirably and energetically play all six parts in the show) give relaxed and confident performances. They almost never leave the stage: dancing, stripping and redressing their way through the scene changes, and their transitions between different accents bring a variety to the performance that might otherwise be lacking in a two-person show. They are agile actors and it is a pleasure to watch them.

In spite of this, the play is undeniably a slightly superficial take on feminism: Steve, the eponymous feminist, lectures Kate on female empowerment, asks politely before kissing her collarbone and wishes he didn’t have to always be the “outside of the spoon”. Kate, the one who apparently needs to learn how to date a feminist, likes her men “tall, dark and smouldering” and thinks that women should move around mysteriously “in a cloud of smoke and perfume”.

In fact, at its crux, the play can’t escape from the very structure it seeks to playfully deconstruct: it is still essentially the story of a man who enlightens, educates and awakens a woman, even if it is the male lead who is a feminist and the woman in question is awakened to her own empowerment.

To its credit, the play does manage to raise some important points – conversations about “explicit verbal consent” and use of the word “rapey” are slightly lost in the humour but it still feels exciting that they’re being openly discussed at all.

And let’s not forget the subtitle. This is a romantic comedy. It wants to entertain us, and on this count it cannot be faulted. The moral of the story may be a little confused, and you won’t learn a lot about feminism, but How to Date a Feminist will certainly make you laugh. The bartender was right about that.

How to Date a Feminist is at the Arcola Theatre, 24 Ashwin Street, E8 3DL until 17 December.