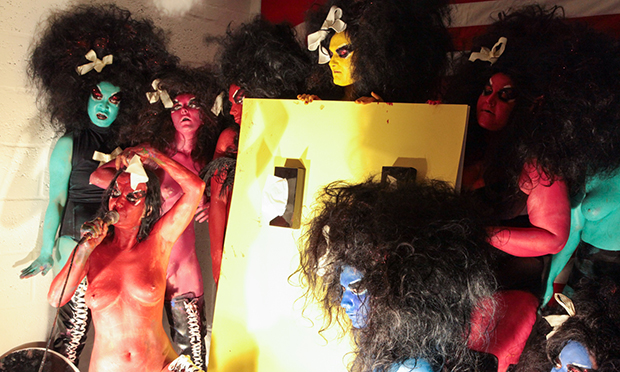 Dolled up: installation view of Capital Improvements by Kembra Pfahler. All images courtesy of the artist and Emalin

The fierce and fearless artist Kembra Pfahler brings her gallery exhibition Capital Improvements to Emalin gallery in Shoreditch until 21 December. It’s a rare London appearance for the US-based artist, bringing her horror-inflected future-feminist grandiosity to this side of the Atlantic just in time to remind us of its importance.

The gallery contains a representation of Pfahler’s apartment in New York City, filled with objects by the artist and some of her regular collaborators, including Bruce LaBruce, Samoa and Richard Kern, and touching on many of the most recognisable images from her multimedia practice. The opening of the installation included a live performance, with Pfahler initiating a series of performance art skits with her art band and collective The Voluptuous Horror of Karen Black. Their name conjures accurately the experience of the performance, greasepaint apparitions of multi-coloured nudity with enormous hair engaging in choreographed tasks and singalong mime. The crowd in attendance felt like the best kind of word-of-mouth assembly, those invested and hungry for what’s being offered.

In the wooden shed that houses the Capital Improvements installation, warped dolls done up like the Karen Black dancers line shelves painted a congealed red. Bold pentagrams and hacked at toys are nestled beneath. Mugs and shirts bearing the image of Pfahler’s sewn-up vagina from Kern’s film The Sewing Circle (1985) are displayed, alongside paintings and framed collage on the walls of the mock bedroom with its sparse red bed. 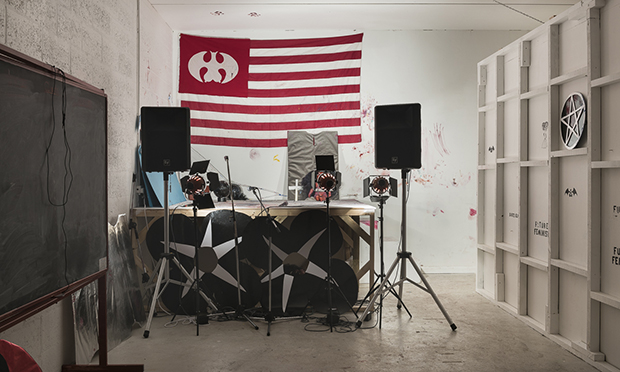 (All images courtesy of the artist and Emalin)

In her accompanying text Pfahler relates the décor to her resistance to gentrification, not only the rising rents that force artists out of areas they once shaped but the more insidious gentrification of style, the homogenising of taste and the orthodoxy of the ‘cool’. Like the Thin Lizzy blasting from the speakers before her performance, the aesthetic is not the overdesigned clutter of the achingly on-trend, but the repurposing of ‘bad taste’ to challenge boring sameness.

I found it impossible to view the paintings, produced by Pfahler with Scott Ewalt, other than in light of their horrific relevance to a post-Trump existence. One shows a fully made-up Pfahler swimming in a blood red ocean over a submerged New York, another the protruding legs of a woman ground into a mincer. They are schlocky warnings and stark illustrations of our current moment.

Although attending the opening also felt like a break in the bleakness of what has happened recently; Pfahler’s work is political and urgent, but also full of raucous energy and sly humour. The loss of cultural heroes and the ascent of demagogues was offset temporarily by a community crowd of similarly inclined alternative types.

The show is resonant now as a way to remind us of potential resistances, whether aesthetic subversion or the community of a night out. Despite its horror show look and cartoonish transgression Capital Improvements highlights how important it is to revel in the challenge to good taste, to conventional wisdom and conservative attitudes. 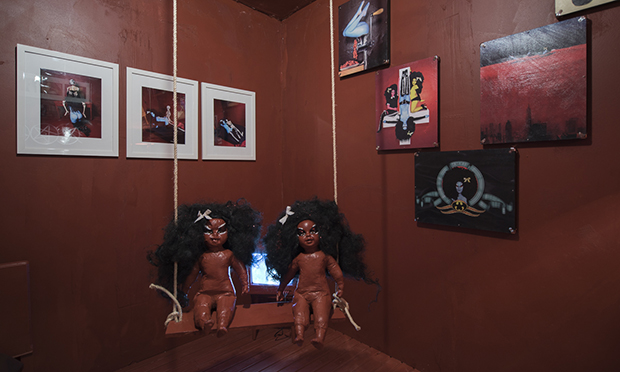 (All images courtesy of the artist and Emalin)