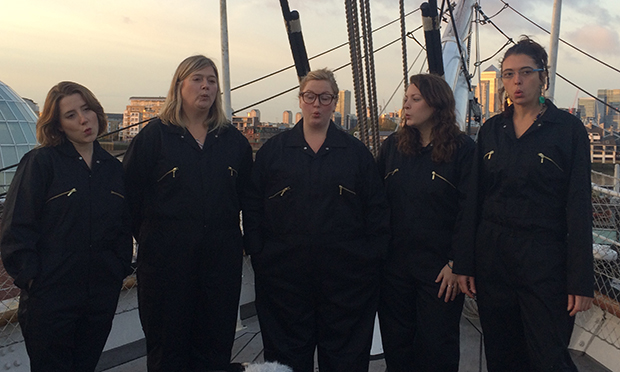 Belles and whistles: members of the choir on Cutty Sark

“I really want to hear you whistle! Or are you all whistled out?”

At this request, a strange and mildly unsettling melody slowly begins to emerge through the usual background noise, whistled by the choir of women gathered around a table in a Greenwich pub.

“It’s amazing, isn’t it?” declares Orla, the slightly tipsy woman who has marched up to the table just to meet the choir. She has already declared herself their biggest fan, despite having missed their first and (so far) only performance.

She Can Just Whistle is the product of five years of “musing and talking” about whistling by the artists and filmmaker Thea Stallwood.

It was only when she met composer Eugene Feygelson through mutual friends a couple of years ago that the idea finally began to take shape.

Between them, they decided to do something that’s never been done before: recruiting a choir of seven women who can whistle, composing an original score for whistlers, putting on performances together, and ultimately making a short film about the process.

So why whistling, and why an all-female whistling choir? For Thea, what came to the fore during her research “was – one – why was it banned in certain places? And – two – why did I not know any women who whistled at that point?”

What she found was that “the two are actually really closely related. There’s a lot of social pressure on women not to whistle.”

In English folklore, a spectral group known as the Seven Whistlers was thought to bring an ill omen upon anyone who heard their music. Even today, whistling is often considered uncouth in polite society.

That could be set to change, though. Fuelled by “a lot of tea and cake” (Thea even brings her own kettle to rehearsals), the choir is currently on the warm-up leg of the project, and spent Sunday evening in the pub after finishing their debut performance on the top deck of the Cutty Sark. An impressive setting, but one that also has particular significance.

Thea explains that traditionally no-one but the captain was permitted to whistle aboard a ship – a space totally dominated by men. “There was this kind of strange anecdote I read about, where a boat was being opened to the public, the captain said: ‘No, no, not her… she whistles’.”

The rest of their schedule runs along similar lines. Next up is the Geffrye Museum in Hoxton.

“The history of whistling in the home is a slightly strange one,” says Thea. “You could whistle in the home if you felt that you were in a sort of protected space with your family, but in terms of anyone entering your home and it becoming a public space, then you weren’t allowed to whistle.”

At the end of the month, the choir will head up to Stoke-on-Trent, where Thea is due to film one of their performances in “a very beautiful ex-ceramics factory”, complete with the abandoned moulds and equipment.

At the industry’s height, ceramics factories in the Potteries employed thousands of women, but again, it was a space in which whistling was prohibited, with fines for whistling deducted from workers’ pay-packets.

“There’s a funny story about a group of women using whistling to tease quite an unpleasant foreman, because you can’t really be told off for it, you’re not really doing anything wrong… it’s subversive,” says Thea.

There’s clearly a certain joy in the rebelliousness of whistling for these women.

Daisy, a member of the choir, pulled a ‘rock on’ hand gesture in the pre-gig photoshoot aboard the Cutty Sark, and number one fan Orla takes great delight in describing how “you know, Taylor Swift and all that lot, they have the sisterhood… well you have the whistling girls! The whistling sisters are here!”

Thea even points out the way the crowds of Icelandic protesters used whistling to call for the resignation of the Prime Minister, Sigmundur Davíð Gunnlaugsson, when he was caught up in the Panama Papers revelations in April this year.

As Thea explains, then, a choir of this kind is “bold”. But where’s it heading next? Can we expect to see a band of whistlers topping the charts one day? “I don’t know,” she replies. “Obviously, if we can claw our way in…”

Orla, on the other hand, is a little less equivocal, telling Thea and the choir: “You know what? In LA, they’d fucking love you.”

She Can Just Whistle perform at 2pm on Saturday 19 November at the Geffrye Museum, 136 Kingsland Rd, London E2 8EA. Entry is free.