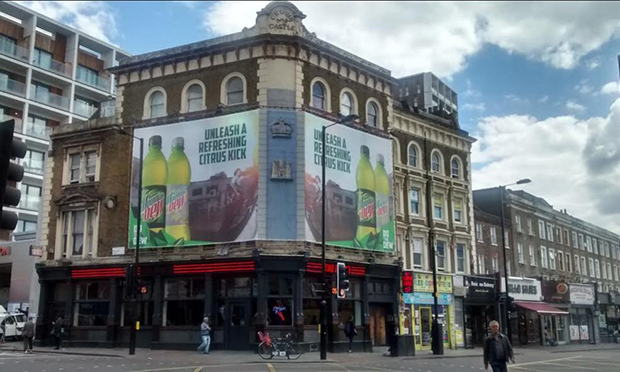 The council is clamping down on ‘mega ads’ that have been plastered across prominent buildings without its consent.

A council spokesperson yesterday confirmed it is taking legal action over a large banner at 600 Kingsland Road, part of the Dalston Conservation Area, as part of an investigation into illegal advertising.

The spokesperson said: “The advertisement in place at 600 Kingsland Road does not have advertising consent and is therefore illegal.

“The council has been conducting a thorough investigation of this and other similarly illegal advertisements in the borough.

Planning documents show consent for “shroud scaffolding covering the whole building…with two inserts for advertisements” was granted by the council on 21 December 2015 and is valid for 12 months.

A statement supporting the application, made by the firm Blow Up Media, reads: “Temporary consent [to advertise] is sought for 12 months whilst the frontage is scaffolded during building works. The proposal would be an obvious temporary feature related to building works going on behind, and not a permanent display.”

It is understood that consent was granted on the proviso that the shroud frontage would allow for – and help fund – restoration work on the building during the 12 months.

But pictures of the site taken this year show no such scaffolding, building works or shroud in place.

The owner of the building Buckingham Investment Ltd and Blow Up Media are required to attend an initial hearing on 9 December 2016 at Thames Magistrates’ Court.

A director of Blow Up Media, who declined to give his name when asked, insisted that advertising consent had been granted. 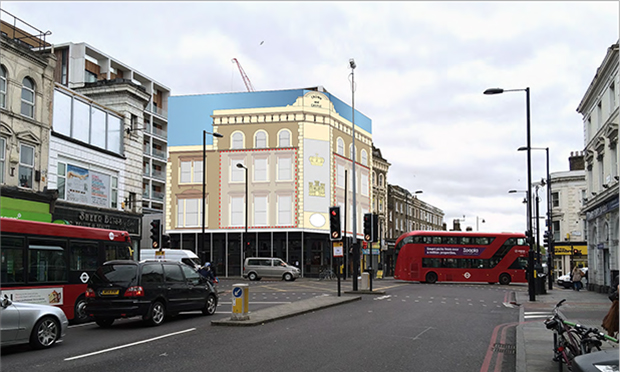 Proposed view of 600 Kingsland Road with scaffolding and shroud façade, as submitted to the council by Blow Up Media as part of its application to advertise at the location. Photograph: Hackney Council 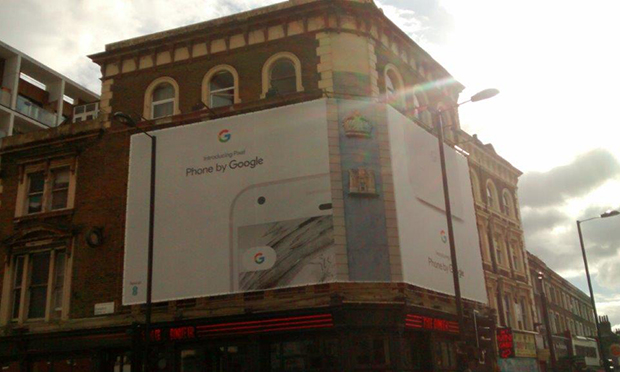 Beautiful jewel of an old pub on #Dalston junction, gets vandalised by a POXY @oakley ad. #Hackney @HackneySociety pic.twitter.com/GmpTGk73Jy

Legislation “not fit for purpose”

Cllr Vincent Stops says the council is ultimately powerless to stop firms advertising without consent in the borough.

He claims companies are able to paste their ads on landmarks in Dalston and Shoreditch knowing the legal process to remove them is costly and time consuming.

“These adverts don’t have advertising consent, but the advertising companies can game the system because they can make a lot of money,” said Cllr Stops.

Although the council is aware of the practice and does intervene, Cllr Stops said it is effectively powerless.

“There will be enforcement cases, but the legislation is not really fit for purpose,” he explained.

Legal proceedings are apparently time consuming, and whilst they are in process the adverts remain in situ.

“It is very frustrating and a waste of public money,” he added.