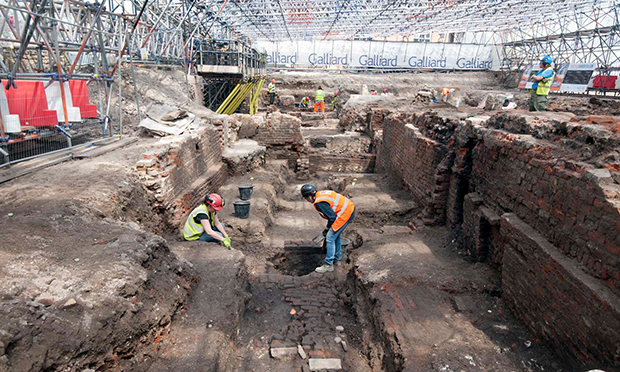 Archeologists excavating the site of The Curtain Theatre

The archaeologist leading excavations on the site of a long lost theatre thought to have played host to the first performance of Shakespeare’s ‘Romeo and Juliet’ says treasures unearthed there could transform scholars’ understanding of how Elizabethan theatres evolved.

Intriguing items found by members of the Museum of London Archeology team during their three-month dig at the Shoreditch site included old pipes, pieces from an Elizabethan children’s game and an object described as a part of a clay figure depicting the Roman god Bacchus sitting astride a barrel. 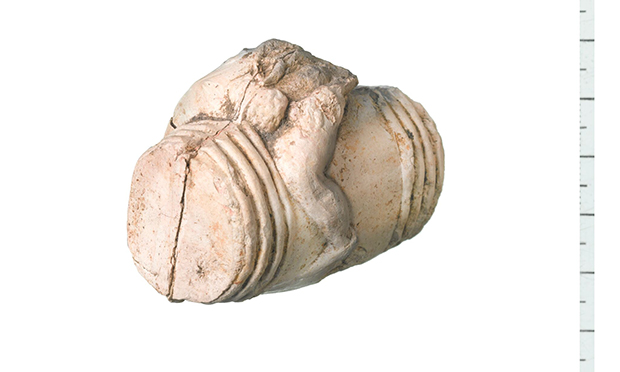 Part of the clay figure of Bacchus

The archeologists, who found remnants of a playhouse known as The Curtain Theatre, have located the stage itself, which they say is much longer than first thought.

They have also found evidence of what they describe as an “unusual passageway” beneath the stage.

Glass beads and pins, which may have come from actors’ costumes, were also discovered, along with drinking vessels and clay pipes, which are likely to have belonged to revelling theatregoers and actors.

Previous finds have included fragments of a rudimentary sound system dating from the 16th century.

Senior archaeologist Heather Knight said: “Finding evidence for one of the first stages that was specifically built for plays at the end of the dig was hugely exciting and significant. This exciting discovery could transform our understanding of the evolution of Elizabethan theatres.

“It also raises questions about the function of the theatre and the types of entertainment that might have been staged here. For example, did the unusual shape and layout of the Curtain stage influence the plays such as ‘Henry V’ and ‘Romeo and Juliet’ that Shakespeare wrote before his company moved to the Globe with a different stage?

“As well as drama, could the Curtain’s stage space have been used for sporting spectacles?

“With the excavation now complete, our plan is to do more in-depth analysis of the finds and further research that will shed some light on some of these mysteries.” 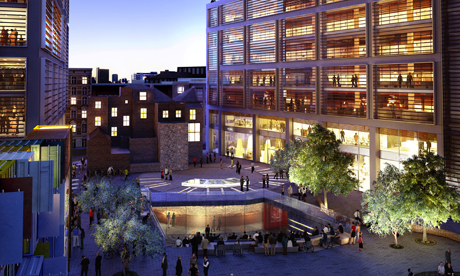 An artist’s impression of the development with the theatre as its centrepiece. Image: Pringle Brandon Perkins+Will

The remains of the theatre, one of London’s oldest, are to be preserved in situ and will become the centrepiece of The Stage, a mixed-use high rise building development containing offices, retail space and flats. Archeological discoveries will go on public display in a visitor’s centre on the site, and budding poets are being invited to submit a poem which will be showcased in 2019.

The entries must be a sonnet or a limerick related to Shakespeare or Shoreditch.

More details can be found here and entries will be reviewed by a panel of judges led by historian Michael Wood and Professor Stanley Wells, Chair of the Shakespeare Birthplace Trust.

The Curtain Theatre was one of earliest Elizabethan playhouses where people paid money to see performances and be entertained.

Fragments of ceramic money boxes have been found, which would have been used to collect the entry fees from theatregoers and then been taken to an office to be smashed and the money counted.

This office was known as the “box office”, which is the origin of the term we still use today.

Shakespeare’s links to Shoreditch will be celebrated at a new exhibition space to be built next to the site where archaeologists believe Romeo and Juliet was first performed.

A planning application by The Belvedere Trust for the development was approved by Hackney Council last Wednesday (9 November).

The building would be finished with diamond pattern brick glazing to create timber framed Juliet balconies and perforated metal shutters.

There will also be a new sculpture of Shakespeare installed at the corner of New Inn Broadway and New Inn Yard.

Application documents state: “The applicants have received an expression of interest from the Department of Theatre and Performance of the Victoria and Albert Museum to work with them to implement the public exhibition space, with the potential for the display of relevant artefacts held by the V&A.”