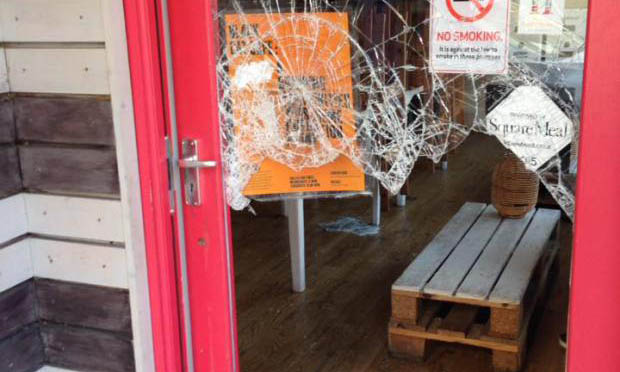 A chef at the Black Cat Cafe has said he is devastated after burglars struck again at the popular vegan hangout in Clapton overnight – just over a fortnight after it was first targeted.

Oli Dunk, who works in the kitchen at the ethically conscious Clarence Road eatery, said he arrived this morning to find glass “everywhere” after criminals smashed their way in.

He told the Hackney Citizen: “We’ve been broken into again. Literally it looks exactly the same as last time. I’m pretty gutted to be honest. I’ve just arrived into work. I was the first to arrive at the last time around as well.”

At least one other premises on Clarence Road is also thought to have been broken into too.

“Someone just told me someone else had been broken into too,” said Dunk.

The Hackney Citizen was alerted to the break in by a local resident, who described seeing the damage to the cafe as he left for work this morning.

A workers’ co-op considered one of the country’s top vegan establishments, the Black Cat had cash and equipment stolen when thieves broke into the premises last month.

A fundraising drive was soon launched by a vegan blogger, and manager Daisy Buckthorpe said she felt “humbled” after being inundated with supportive messages from the cafe’s loyal fan base.

Update at 4pm on Thursday 10 November:

Sean O’Callaghan, who runs blog Fat Gay Vegan, told the Hackney Citizen: “I ran a fundraiser the first time they were broken in, and within six hours launching we hit the target of £1,000 pounds. It’s almost up to £2,000.

“It proved how important and valued Black Cat Café is to the local community. They do so much for the community, they’re not just a café.

“They’re building social capital and helping the community. This is why people feel so emotional about the original break in.

“The fundraiser is still online, and people can still contribute.

“It’s really unfortunate that a group of people that do so much for their local community have had these upsetting events happen to them.”

To support the cafe, visit www.justgiving.com/crowdfunding/blackcathackney