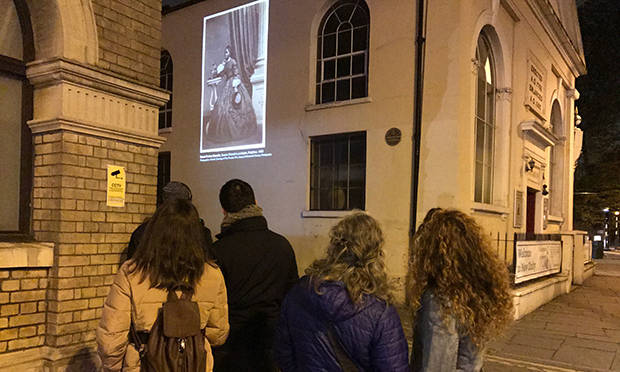 Portraits of pioneering black women who lived in Victorian Britain have for five days been projected onto the facade of the Unitarian Church in Newington Green – with tonight the last chance to view them in Hackney.

For three years Autograph ABP has been hunting down photographic evidence of diverse black presences in Victorian and Edwardian Britain as part of three-year research project The Missing Chapter.

Their discoveries are to be projected above graffiti artist Stewy’s portrait of radical feminist Mary Wollstonecraft, who was the author of A Vindication of the Rights of Women (1792) and famously a member of the church’s congregation.

Among the portraits are a leading figure in women’s rights and social activism, a mother who raised her daughters to become leading suffragettes, a travelling missionary, an accomplished linguist and pianist, a freed slave who realised her life-long dream to travel to England to meet Queen Victorian and a heroine of the Crimean war who saved lives as a front line nurse.

Presented in collaboration with New Unity, it is the second of three projections, with the third taking place next week in Tottenham.