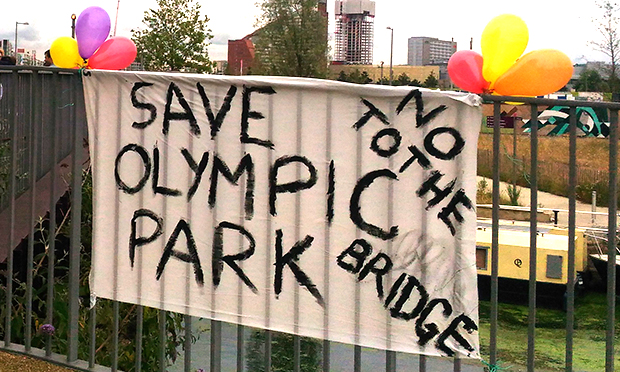 Dozens of people have protested against plans by Olympics legacy chiefs to bulldoze a cycle bridge into the Olympic Park and replace it with a crossing built predominantly for cars.

“It will get very busy, create a lot of noise and reduce air quality in an area where children live.

“HGVs will be driving just feet away from people’s balconies, and the narrow roadway will be used by cyclists too, making it incredibly dangerous.

“Monier Road bridge is loved by locals and tourists, who use the Santander bikes nearby to ride around the park.

“The whole thing is a terrible waste of money.”

A petition signed by more than 700 people will be delivered to the LLDC, and residents have also written to Mayor of London Sadiq Khan with their objections.

The Fish Island proposals include a new pedestrian bridge to be built at the nearby Stour Road, which will see Vittoria Wharf demolished to make way for it.

Artists renting live-work space at the wharf recently launched their own campaign against the plans.

Commenting on the Monier Road bridge demolition, a spokesman for LLDC said: “This new bridge will significantly improve connections around Fish Island, Hackney Wick and into Queen Elizabeth Olympic Park, helping the area properly benefit from the regeneration investment being made there.

“As well as supporting existing residents and businesses, the bridge will connect the area with the 1,500 new homes, businesses and schools that will be built at East Wick and Sweetwater.

“This bridge received planning consent in 2012 and we have undertaken extensive consultation on these proposals.

“The plans are supported by many local residents and businesses and we are keen to work with local people to ensure the bridge benefits everyone.”