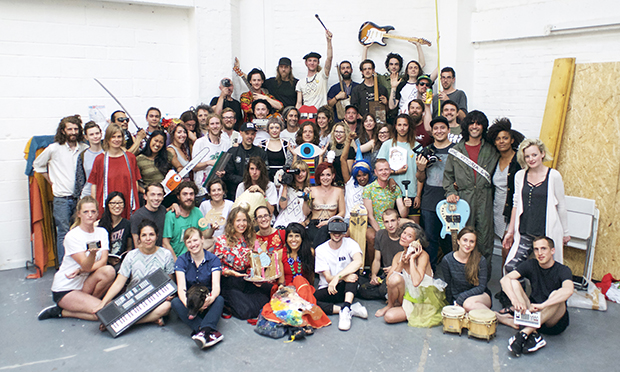 Up in arms: artists and residents from Vittoria Wharf. Photograph: Kirsten Allen

A group of artists is fighting to stop the demolition of Vittoria Wharf in Hackney Wick.

The London Legacy Development Corporation (LLDC), which owns half of the wharf, is to bulldoze the building to make way for a new pedestrian bridge.

The wharf is home to many writers, artists and makers who currently rent live-work space at the site on short-term lets.

Tenants have been served with eviction notices and must be out by Monday 5 September.

Commenting on their predicament, Kirsten Allen, who is leading the ‘Save Vittoria Wharf!’ campaign, said: “Creative communities like Vittoria Wharf are vital to the future of London.

“Hackney Wick was designated as a cultural quarter by the London Legacy Development Corporation, which is now ironically facilitating its destruction.

“We believe the value of our community and its creative output unequivocally outweighs that of a superfluous footbridge.

“Communities and ‘culture factories’ such as ours are constantly being culled, but must be nurtured in order to foster the artists of tomorrow.”

The ‘Save Vittoria Wharf!’ campaign officially launches this weekend at Wickstock, a three-day festival which features art, music and poetry from the local community.

The LLDC says it has given tenants one month’s extra notice to move out and is also providing support to help relocate them, despite having no legal obligation to do so.

Ms Allen said: “The developers have no grasp on what they’re doing to the local community.

“Vittoria Wharf has huge value and has changed the lives of people around here immeasurably.”

Campaigners and members of the local community will meet with LCS on Tuesday to discuss the situation and put forward an alternative proposal for the site.

Visit SaveHackneyWick for more information on the campaign and this weekend’s Wickstock festival.

‘Save Hackney Wick!’ campaigners have now launched a petition that can be found here.