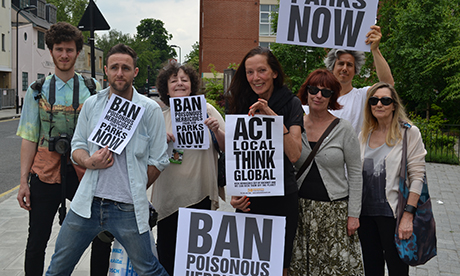 Katharine Hamnett with fellow campaigners ahead of the meeting on Saturday

Campaigners demanding an immediate end to Hackney Council’s enthusiastic use of controversial herbicide glyphosate were joined by former Friends of the Earth Executive Director Tony Juniper to push for the issue to be high up on the political agenda ahead of local elections taking place this Thursday.

Dozens of people attended a meeting on Saturday at St Michael and All Angels Church Hall next to London Fields, which was organised by fashion designer Katharine Hamnett CBE, who has described glyphosate as a ‘poison’.

Biotech industry representatives say there is no evidence the chemical, used to kill weeds, poses any risk to human health. Glyphosate is approved for use by the European Union.

But Ms Hamnett was outraged when she discovered it was being used by Hackney Council workers in parks as well as on streets and estates.

Glyphosate was first produced in the 1970s and is widely used in agriculture. It is marketed as ‘Roundup’ by biotech giant Monsanto, and some environmentalists claim it can cause harm to the ecosystem and potentially to humans. 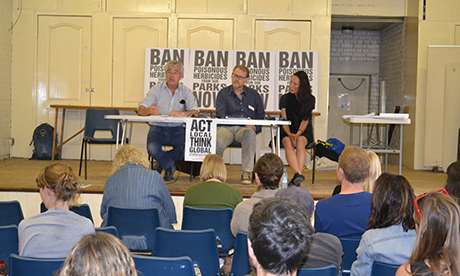 Mr Juniper acknowledged “generating proof” of this was “genuinely complicated because there is a lot of data being generated”.

However, he added: “Whether it is on this side of the argument or the other side, it is complicated, which is why policymakers back in the 1970s adopted the idea of the so-called precautionary principle, and this was enshrined into the Rio Treaty in 1992.”

This means “the benefit of the doubt should go with human health and the environment” and that local authorities should therefore not use glyphosate, even if only as a precaution, Mr Juniper added.

But he said national government had “abandoned the precautionary principle” because it was “deemed to be an attack on big business, and they think they must protect business interests at all costs”.

He told the meeting the use of Roundup was already banned in some countries.

“In Denmark Roundup is banned,” he said. “In cities across the world pesticides are banned.

“Two hundred towns and cities in France have banned all pesticide use in their areas.

“There are cities from Japan to Canada that do not allow the use of pesticides in their parks, in their urban spaces, in their hospitals and in their schools. So it is possible that it can happen.

“Tell Hackney Council there are other places that don’t use these chemicals.”

The meeting also heard from Pesticides Action Network Director Keith Tyrell, who said: “The only thing that is going to change is if people act locally and tell their local representatives that they want change.

“It’s not a good idea, especially when it is just to get rid of something like dandelions.”

Last year it was revealed that Hackney Council spends £40,000 each year on dousing our streets with glyphosate.

Initially the council claimed it did not do “blanket spraying” but instead targeted very specific small areas only.

Campaigners have since produced evidence which they say shows untargeted blanket spraying is being carried out.

Friends of the Earth campaigner Paul de Zylva said tests indicated the chemical was now present in the urine of Londoners, meaning it has entered the food chain and water system.

Kim Wright, Corporate Director for Health and Community Services at Hackney Council, said: “This product has been declared safe and environmentally friendly by government and it is used by councils across the country for weed control as well as being widely on sale to the public.”

← Leaflet watch: Just how accurate is Clissold Liberal Democrats’ ‘others can’t win’ claim?Tower Theatre Company on hunt for new permanent base in Hackney →