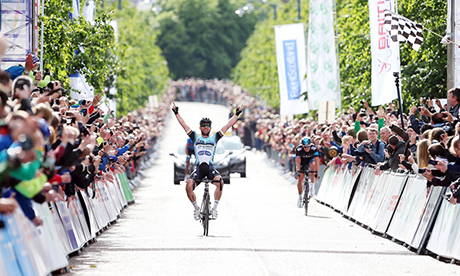 Cycling’s most famous race is set to roll through Hackney this summer.

The third stage of the 2014 Tour de France will be routed through Ruckholt Road, East Way and Waterden Road in the Hackney Wick area, followed by a race through the Queen Elizabeth Olympic Park. Competitors will then continue towards central London for the final sprint up The Mall.

Cycling Club Hackney manager Keir Apperley, who has travelled to France seven times to see the race, said: “I still can’t believe it’s going to be coming down our roads, the same roads that we train on, it’s insane. I don’t think people quite realise the enormity of it.”

“When the Tour is happening in front of you, it’s unreal. I don’t know what to compare it to; the first time at Glastonbury Festival or something. It’ll be a complete shutdown, everything is about this race. It’s a day long street party for cycle sport fans. I wish all schools would close for half a day just to let young people witness the day Le Tour came to Hackney.”

The journey from Cambridge and London makes up Stage 3 of the world-famous race, taking place on Monday 7 July. The route covers 159km and passes through Cambridgeshire, Essex, North and East London, finishing up in Westminster. Stage 1, July 5, runs from Leeds to Harrogate, and Stage 2, July 6, runs from York to Sheffield.

Jules Pipe, Mayor of Hackney, said: “It’s fantastic such a prestigious event is coming to East London and only right that it passes through Hackney, the capital’s number one borough for cycling. Seeing cycling’s superstars race through our streets will hopefully inspire even more people to get on their bikes and lead more active lifestyles.

The Mayor has also said he hopes the event will provide a boost for local business as thousands of spectators descend on the borough to watch the event.

Chair of Hackney Cyclists Trevor Parsons welcomed the event, but urged would-be cyclists not to be put off by the glamorous side of the sport: “Coming out of the success of British sports cyclists in the Tour de France and the 2012 Olympics, events like this will help to support the trend of cycling as a sport… but what we’re also trying to encourage is everyday cycling, in everyday clothes.”

Free professional cycling lessons are available through the Council for beginners as well as experienced cyclists.

The roads which make up the route are expected to be closed for much of the day. There will be significant congestion on nearby roads and parking restrictions may apply in some areas. Mayor Pipe said: “We’ve been advising businesses, schools and other organisations to help them plan to minimise disruption and make the most of the day.”

The London section of the tour is being managed by TfL, the GLA and London & Partners. The complete route in London has been published by TfL, and more details of the race itinerary and specific road closure times will be made available over the coming months. For more information, visit TfL’s Tour de France page.