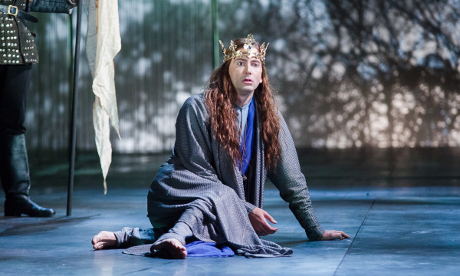 David Tennant is a brilliant Richard II. In this, the first installment of RSC artistic director Gregory Doran’s formidable mission to stage every one of Shakespeare’s plays over the next six years, he carries the lead with a lightness of touch and an agility of voice and expression that pirouettes delicately between the vanity, self-righteousness and – ultimately – pity of the deposed king.

We open in a court of mourning, with Richard’s murdered uncle the Duke of Gloucester’s coffin centre stage – his widow thrown across the casket. The arched vaults of a sombre cathedral are projected onto chain curtains as part of Stephen Brimson Lewis’s elegant and masterfully devised staging.

Up in a lofty parapet the sepulchral voices of three sopranos fill the space with heartbreaking songs of grief – a recurring refrain throughout the play.

Tennant’s performance gathers strength as Richard’s power over crown and country wanes. The king’s weakening grip on power is highlighted visually by his physically fragile frame under long Christ-like curling locks and the elaborate brocade of his costume.

He is ostensibly disinterested in the politics of court and the antler-locking of the nobles that will eventually betray him.

Initially the crown – a central symbol in this play of kingship – appears to weigh lightly on his head. He dangles it, places it even at one point playfully on his beloved cousin the Duke of Aumerle’s head.

It’s only once he’s lost it that he seems to become aware of its value. He does not quite win our hearts. Yet treading barefoot on the stage in a floor-length nightshirt and long maiden-like hair in the scene of his deposition, a mortal once more, he is so childishly vulnerable and dignified in demise that Tennant manages to make us sympathise with him.

But it insults the calibre of this majestic production to pin its success on just its high-profile star. The RSC is fronting a very strong line-up of experienced hands and fresh blood and his performance is simply the keystone in a magnificent show.

Nigel Lindsay’s Henry Bolingbroke is in contrast to Richard a storming, towering force on the stage, charging across the boards and squaring up to the frail king from whom he will seize the crown. He is dismissive of Henry’s theatrical speeches, as vital and energetic as Richard is other-worldly and delicate.

Oliver Ford Davies – who also played alongside Tennant in Hamlet – proves he is still at the top of his game as a vigorous Duke of York. He brings humour and sadness to a man torn between loyalty to the holy crown and Bolingbroke’s ascending power in this turbulent period of English history.

His indomitable wife is played by fiery Marty Cruikshank and their son Aumerle, by a strapping Oliver Rix. Tortured by anguished loyalties, Aumerle will ultimately commit that most awful of Christian crimes – the murder of an anointed king.

The Barbican is a stunning stage to work on and Brimson Lewis’ design is simple yet brilliantly leveraged. A descending platform on which the throne rests is particularly impressive – creating richly symbolic frames around key scenes.

After his murder Richard is suspended above the court to the right of the throne in an again strikingly Christ-like pose while his traitors stand below.

The production follows an acclaimed run in Stratford and marks a new tie-up between the RSC and the Barbican for which this sets a very high standard.

Richard II is at the Barbican, Silk St, EC2Y 8DS until 25 January