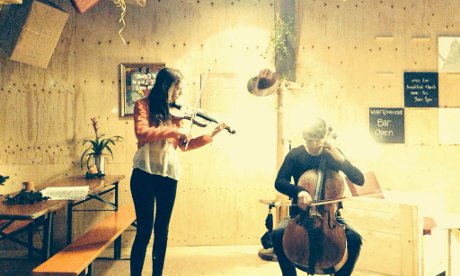 This year marks the ten-year anniversary of Nonclassical, an East London-based record label and club night.

Its purpose is to bring classical music to the here and now, transplanting it from churches and concert halls to nightclubs and more modern venues.

“To share my music with my peers, I need to take it to the places that are a part of their lifestyle,” explains Gabriel Prokofiev, Nonclassical’s founder and director.

The 38-year-old, whose grandfather Sergei was one of the major composers of the 20th century, wants a younger audience to experience the splendour of symphony.

For the most part this means ‘deformalising’ the concert hall experience, so instead of watching artists in silence you can clap when you want, grab a pint, socialise and still enjoy uncompromising and challenging new music.

“It’s not an attack on the traditional concert hall experience,” insists Prokofiev, “we simply present classical music in a non-traditional way.”

Prokofiev says audiences are responding to the Nonclassical approach. He says: “They fall naturally silent during the live performances and they really love the live classical performances. There’s a very exciting energy.”

Nonclassical is not the only group responding to the perceived elitism of the genre. Other fellow classical-progressives include Kammer Klang in Cafe Oto, London Contemporary Music Festival and the Multi-Story Orchestra in Peckham.

“It was only in the 19th century where the rules changed and people were told not to clap between the movements of a piece,” he adds.

The label-cum-club night has now spent ten years modernising the classical concert experience, and has had fun in the process.

“We brought a 52-piece orchestra to XOYO to play Penderecki’s ‘Threnody’,” says Prokofiev, recalling a rendition of the Polish composer’s famous piece for stringed instruments, dedicated to the victims of Hiroshima. “And then there was the Pioneers of Electronic Music festival, and November’s epic Pioneers of Percussion festival.”

The next word is expansion beyond East London, including some international events. “In the last year we’ve been in Berlin, Switzerland, Brazil, and Canada,” says Greer, “This year we’re looking to have more of these satellite nights.”

Greer adds that Nonclassical is working hard to broaden its audience. “There’s still a lot of work to do,” he says,” but what started as an occasional club night ten years ago has, for the last five, been a monthly event with residencies in some of London’s most important venues.”