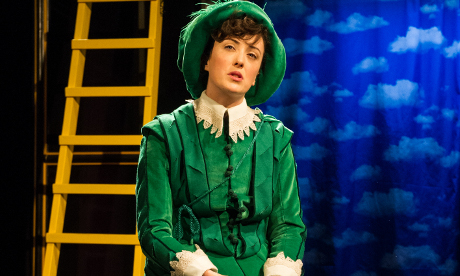 Green is the colour: Donna Juana in Don Gil of the Green Breeches. Photograph: Jane Hobson

The Spanish Golden Age, beginning in around 1492 with the fall of Islamic Spain and ending nearly two centuries later, was where it all began artistically for modern Spain.

A walk through the centre of Madrid will find streets named after its key players: the painters Velaquez and Zurbarán, and of course Cervantes. The period also produced some of Spain’s finest playwrights and plays, which this month the Arcola will celebrate with their Spanish Golden Age Season.

Over ten weeks, three classic plays – two comedies and a tragedy – will be brought to the stage in new translations, performed by a repertory company of 10 actors and directed by Mehmet Ergen and Laurence Boswell, the artistic directors of the Arcola and Theatre Royal Bath’s Ustinov Studio respectively.

“The Spanish Golden Age was an incredibly creative and significant period in the history of theatre,”explains Ergen, “and this season celebrates three of its greatest, funniest, and most passionate plays, performed by an exceptionally talented repertory cast.”

The comedies include Don Gil of the Green Breeches by Tirso de Molina, translated by T.S. Eliot prize-winning poet Sean O’Brien. The1615 play sees the jilted Dona Juana follow her lover to Madrid and assume the identity of his new love, using a pair of green breeches to aid her quest.

Also on the bill is Lope de Vega’s A Lady of Little Sense, a romantic comedy in which a businessman tries to marry off his two beautiful daughters with unexpected difficulties.

The third play of the programme is also by Lope de Vega, the great tragedy Punishment without Revenge. Set in Renaissance Italy, it tells the story of a womanising duke with an illegitimate who is sent a beautiful Duchess bride with whom to have a legitimate heir that would provide stability. Although a passionate love develops, it is not one between the Duke and Duchess, leading to brutal consequences.

The plays are at the heart of a festival that includes readings of classic and contemporary Spanish plays, discussions, music, dance and food.

The Spanish Golden Age Season is at the Arcola, 24 Ashwin Street, E8 3DL from 9 January – 15 March