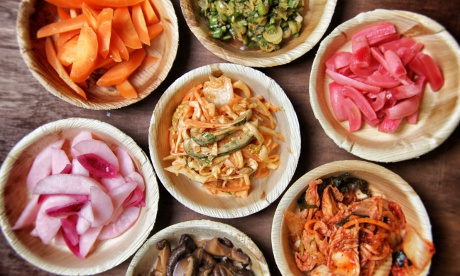 How many nights have you found yourself glued face-down to the kebab shop counter wishing you’d had a sandwich before inhaling a few too many tequilas? Likely more than you’d care to remember. And, frankly, there’s only so much fried chicken can do for you at that point.

But never mind that. Because roll over Kentucky, there’s a new KFC in town. It’s yangnyeom tongdak or Korean Fried Chicken to me and you and – fingers crossed – it’s here to stay.

The fashion for fast food has been gathering steam across the city – from Meat Mission’s deep fried pickles to Shake Stack, Five Guys and the five hundred other novelty burger hangouts that seemed to open over the summer.

Propelled by this new appetite for battered goodness, Korean kitchens like Jubo serving fried chicken and other anju – drinking food – are growing in popularity. And rightly so, because the food is delicious. Tucked inside Bedroom Bar in Shoreditch, Jubo’s late night food joint puts a zingy twist on a familiar favourite. It’s not all about the fried chicken here but that’s the main focus of the menu. You can pick various combinations of sweet chilli or soy and garlic in strips or wings. Both are pretty tasty.

The chicken is twice-fried and covered in a sticky syrupy glaze, leaving the meat nice and juicy inside. Sesame seeds and spring onions added a nice layer of  avour and the chips are excellent. My favourite part was actually the kimchi slaw. Kimchi is made of fermented or pickled vegetables with lots of seasoning. Sound revolting?

Well it tastes divine. The pickling gives the shredded vegetables a sour and spicy kick that cuts clean through mouthfuls of crispy batter.

If chicken ain’t your thing, don’t panic. There’s plenty more to choose from. We tried the steak bulgogi sub with some nice caramelized onions and peppers and cheese in a roll. The slow-cooked pork belly with pickled cucumber and hoisin-based sauce also looked good and so did the slow-braised beef brisket with spring onions and mushrooms.

Translated as ‘canteen’ in Korean, Jubo is a super chilled diner-style eatery great for a stop-o on the way home or an after-work catch up with a couple of cold beers.

← Hackney gets its goatGujarati Rasoi to double capacity →